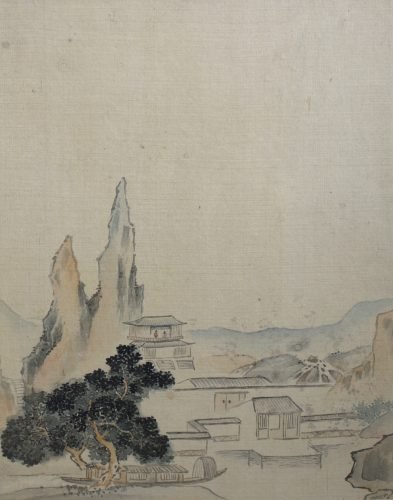 The scenes are all landscapes done in ink and some with the addition of light color, all but three with architectural elements and all but five with figures. Each of the scenes focuses on a limited portion of the pictorial environment—a riverside villa, fishing boats, misty mountains, sharply-rising pinnacles—while unity is maintained by similarity of forms and brushwork. The result reads like a series of snapshots taken during a stroll across the seasons of the year.

The artist, Gu Ding, is not recorded in standard biographical dictionaries but the style suggests that the album was painted during the 19th century. Many of the pictorial elements have precedents in works by Suzhou masters of the Ming and Qing dynasties and it may be suggested that Gu Ding was active there or at least influenced by members of that literati school of artists.