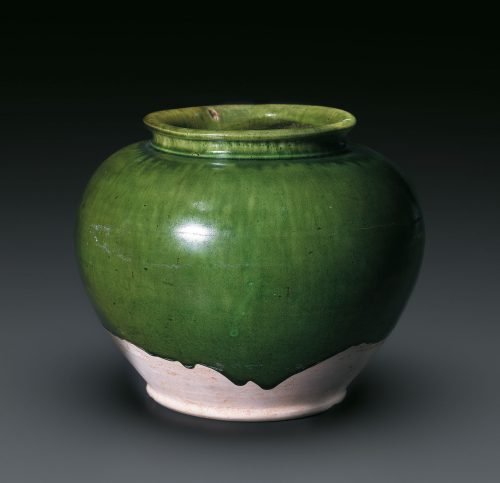 Of ovoid shape with short neck and rolled rim, the jar is finely potted with thin, even walls and rests on a slightly flared foot with flat base. The green glaze spills onto the interior of the rim and falls in evenly spaced thin sheets over the rounded shoulder. It pools to a deep forest-green color just below the neck and also on the sweeping edges and thick drips toward the base. The high quality of this jar is evident in the compact pinkish earthenware as well as the glazed interior, which is a golden-yellow color.

For around three centuries after the fall of the Han dynasty lead-silicate glazed earthenwares, that had during the Eastern Han ( A .D. 25-220) furnished the underground abodes of the deceased with colorful mingqi, vanished from the repertory of the Chinese potter. It was not until the Tang dynasty (A.D. 618-907) that these colors were reintroduced or revived, and with renewed vitality. The greater stability of the glazes allowed their survival in pristine states into the present and their bright, intense, electrifying colors were made possible, really the norm, through improved techniques in their preparation and firing. Important in this process and laying, literally, the foundation for the color was the use of a white slip on the raw body of the ware before the application of the glaze. However, given the finer, lighter-colored bodies, preparatory slip-coatings were often not even necessary, as exemplified in the present jar which was not treated with slip before glazing. An example from the Meiyintang collection, on the other hand, was treated with slip and is also interesting due to the spout, a rare occurrence and similar in form to our catalogue no. 49 above (fig. 1). One production site for these wares was Gongxian in Henan province and during the subsequent Song period (A.D. 960-1279), kilns across the north, including even the Ding kilns that specialized in fine white wares, had added copper-green to their game books.

The vast number of monochrome and multi-coloured jars shaped like the present that survive today, all members of the extensive group known in general as sancai, ‘three-colored ware,’ testify to their popularity as Tang period funerary accoutrement. While the tombs received their due in the figural ceramics that were on service and protective duty in the afterlife, the jars, such as the present, would stand by with their contents ready for use. At the same time, they would lighten, brighten, and enrich the environment with their simple jewel-like colors, as if in fact the netherworld was studded with large, colorful, perfectly formed gems. The present jar is indeed such a gem and was once a treasured possession of the Idemitsu Museum of Arts in Japan. 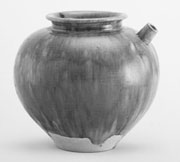