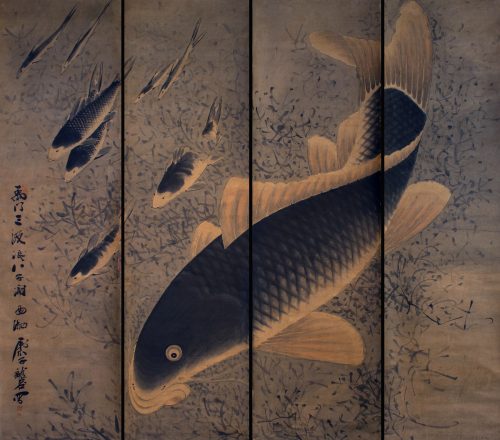 Inscription:
“In the third stage at Yumen, the eight youngsters struggle with the waves. Painted by Gong Gu, the Tiger-claw from Xihu.”

The expansive composition extends unbroken over four scrolls of painting, a giant carp, accompanied by eight smaller fish, dominating the composition. Waterweeds appear in the background, setting off the fish and creating some sense of pictorial depth.

Fish are general symbols for “plenty, more than enough, abundance,” while the carp has a more specific relationship to the goal of passing the examinations for civil service. Carp are used as a metaphor for a poor scholar who passes the examinations and becomes a high official, the difficulty of that endeavor being likened to a carp swimming upstream on the Yellow River and leaping the rapids of Dragon Gate.1 The Yumen of the present inscription uses another name for Dragon Gate, so the intended symbolism is clear, perhaps with the giant size of the main fish identifying him as the successful candidate.

Similar paintings occur at least by the Yuan and Ming eras (fig. 1), and the desire to congratulate successful examinees continued unabated into the Qing dynasty. Gong Gu is not recorded in standard biographical sources, but in his inscription he notes that he was from Xihu, “West Lake,” or Hangchou. Gong was thus clearly a Chinese artist, but in fact some have suggested that he was a Chinese artist working in Korea, judging from the style of the work. In any case a 19th century dating seems appropriate for the work wherever this striking image was created. 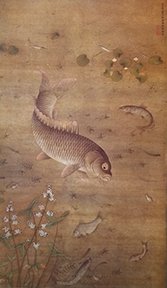