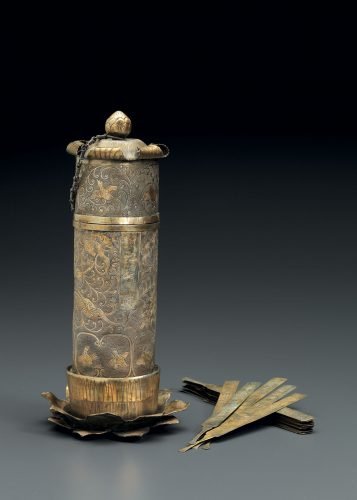 Shaped like a cylindrical pagoda, the silver container rises from a slightly wider cylindrical stand nestled in the center of a large finely crafted lotus blossom, the double layer of graceful petals opening in a halo around the stand, itself finely incised with narrow upright blades above a border of vertical lines, the stand and base all gilded. The upper portion of the cylinder is a removable lid surmounted by an organically rendered lotus leaf striated with veins, the leaf rising into a dome topped by a bud-shaped knob, the six leaf tips around the periphery of the lid each curling up to reveal the naturalistically rendered veins beneath, all gilded. The knob is fitted with a silver chain linking the cover to a loop on the body of the container. A rectangular cartouche on the side of the body encloses a four-character inscription, Lunyu yuzhu, “Analects Jade Candle.” A coiling three-clawed, scaly dragon with prominent saw-tooth dorsal fin ascends with legs akimbo on the left of the cartouche, its eyes bulging and mouth agape. On the right-hand side a phoenix with head held high, beak open and crest flowing above the arched neck spreads its finely feathered wings while the long tail extends rearward, the creatures amid scrolling vines, the slender stems issuing loops ending in curls, with scattered clouds rendered as short scrolling bands floating amid the vines. Pairs of small dove-like confronting birds occupy four large upright panels around the base, each panel formed by two confronting “C” shapes. The same paired-bird motif is repeated on the cylindrical cover on a ground of vines and clouds similar to that of the vessel and the vessel and lid decoration picked out in gold. The motifs on body and lid are all set against a minute and uniform ring-punched silver ground. The twenty thin silver lots are of elongated paddle shape, each incised with a line from the Analects followed by a phrase to designate the identity of an individual, followed by a measure in fen, a single fen equaling a little over a third of a centimeter.

The only other Analects Jade Candle drinking game set known at present was excavated from a large hoard of silver objects discovered at Dingmaoqiao, Dantuxian, Jiangsu province in 1982, consisting of the “candle,” fifty lots, and a number of additional pieces that were apparently standard Tang drinking-game equipment (figs.1-3).[1] The excavated example is mounted on a gilt silver base in the form of a tortoise. The ragged edge of the bottom of the present container’s lotus base suggests it had originally been soldered to another object, most likely to a tortoise similar to the excavated example (det. a).

While no mention of this particular drinking game is known from Tang period literature, the game is self-named by way of the inscription. The cylindrical container represents the “jade candle” and the bud or flame-shaped finial the burning wick. The Lunyu, “Analects,” are a collection of ethical maxims formulated by Confucius (d. 479 B.C.) in conversations with friends. The twenty individual strips of the present set and fifty of the excavated set are each inscribed with a single line from the Lunyu. For example, the line “To have friends come from distant places, is it not a joy?” appears on a strip from each set. Each is followed by a designation, “main guest,” who was expected to consume a quantity of liquor indicated by the last characters of the lot, in this case “five fen.”[2] Another of the present set can be translated, “Choose what is excellent in them and follow it; the person whose vessel is great; forty fen.” Presumably it took a vessel much larger than a tiny drinking cup to follow that direction and one wonders how the cups were assigned to participants in the first place.

The designs present on the two gilt-silver Analects game containers are not unusual in Tang silver and gold work. Almost identical scroll motifs and the paired birds, for example, are found on a good number of Tang silver wares, along with the distinctive form of the lotus leaf of the lid (det.b) which was used in Tang metalwork in various contexts. Dragons and phoenix are less frequent visitors but present, nevertheless, as seen in the unusual appearance of a dragon on the base of a bowl shown here next to the dragon from the present container (fig. 4 and det. c) and a winged creature shown here next to the phoenix on the present container (fig. 5 and det. d). Both vessels from the Hejiacun hoard were discovered at a building site in Xi’an and datable to the 8th century.[3] A vessel decorated with a feathery scroll like that of the game containers was part of a rare set of special vessels and implements for preparing tea discovered beneath the pagoda of the Famen Temple in Xi’an and believed to have been made between A.D. 860 and A.D. 874 (fig. 6). An almost identical gilt-silver container with lotus lid and base together with inscribed strips or tablets is decorated, however, with Buddhist deities, inscribed in the cartouche with the title of a Buddhist sutra, and the strips with passages presumably from the sutra. Importantly, one of the strips bears a date corresponding to A.D. 868.[4] The excavated Analects game container from the hoard at Dantu, along with over 300 more examples of silver, was believed to have been buried a century earlier. Whether such similarities in vessels produced a century apart indicate conservatism in the silver-making industry or the necessity to re-think the dating of the Dantu hoard, the Tang craftsmen are recognized through such finds as absolute masters at crafting inventive and original contrivances for secular and religious use, even as they also produced more routine table and ornamental wares for the use of members of the nobility in their daily lives.

At first glance the pagoda-shaped container of the present set strikes us as an object or vessel that should have Buddhist relevance and application. East Asian and Southeast Asian pagodas developed from the distinctive Indian Buddhist monuments called stupa, which were erected to house the actual remains of the Buddha or relics associated with the Buddha. The Chinese not only built full-scale pagodas as part of their religious practices but also created smaller models in ceramic, metal, and stone that were inscribed with Buddhist scriptures or prayers, as in the cylinder dated to A.D. 868 mentioned above and also seen here in a ceramic pagoda of the Song period with incantations to the Buddhas of the Four Directions (fig. 7). Containers were also fashioned as receptacles for Buddhist texts that were written on silk or paper, also popular in the Liao Buddhist liturgy as illustrated here (fig. 8). In Japan the sutras or scriptures were placed in “sutra containers,” consecrated and buried in sutra mounds in unusual and prominent displays of faith unique to the Japanese (see cat no. 52). The present vessel, however, despite its sacred form, was functionally secular and purely profane.

3. For a description of the fascinating find of 255 gold and silver items along with other goodsamounting to 1000 pieces in all, stored in two large ceramic and one silver jar, discovered in Hejiancun in Xi’an, Shaanxi province see Valerie Hansen, “The Hejia Village Hoard: A Snapshot of China’s Silk Road Trade,” Orientations, February 2003, pp, 14-19 and for a historical background and suggested date for the burial see Qi Dongfang, “The Burial Location and Dating of the Hejia Village Treasures,” ibid., pp. 20-24. 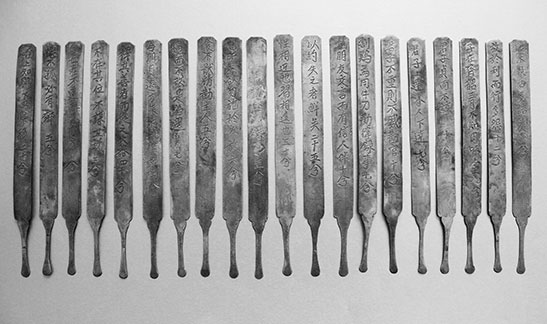 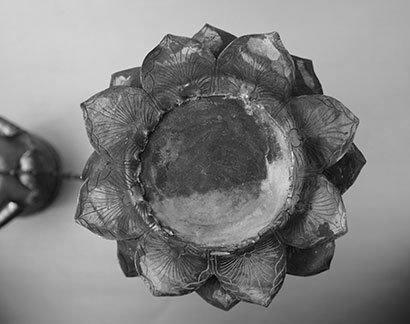 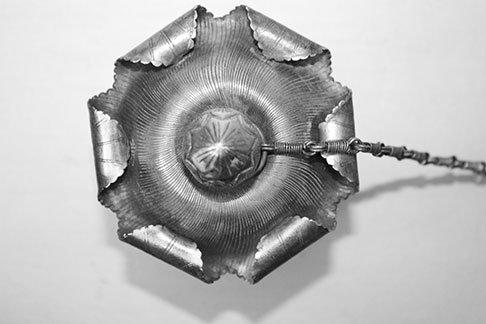 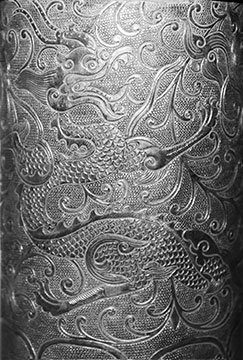 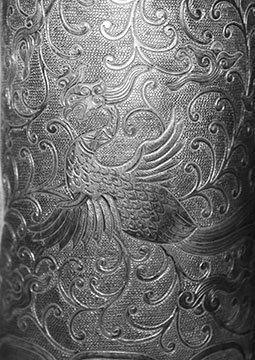 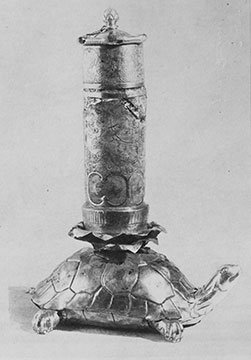 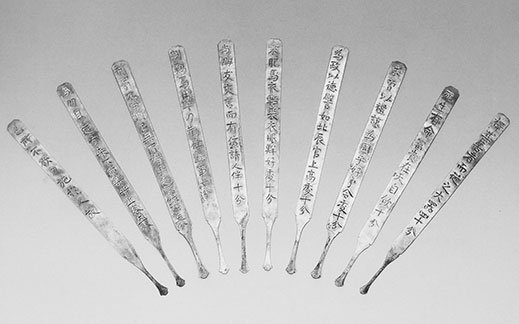 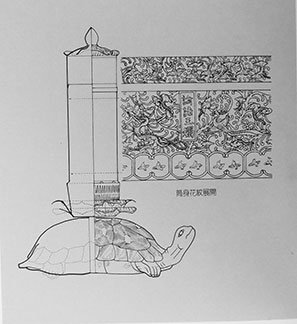 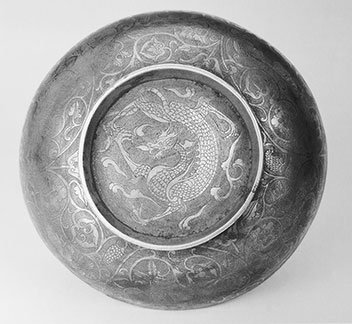 Fig. 4: Gilt-silver bowl with dragon decor on the base, Tang dynasty, 8th century A.D.,excavated at Hejiacun, Xi’an, Shaanxi province, after Gold and Silver: Selected Treasures of the Shaanxi History Museum, Xi’an, 2003, pl. 13B 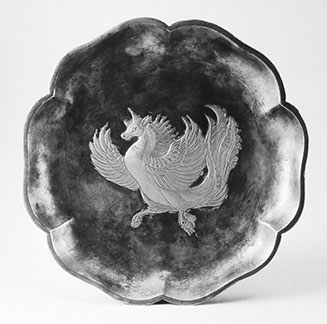 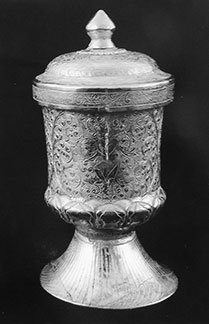 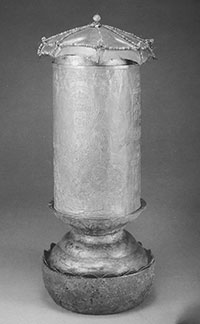