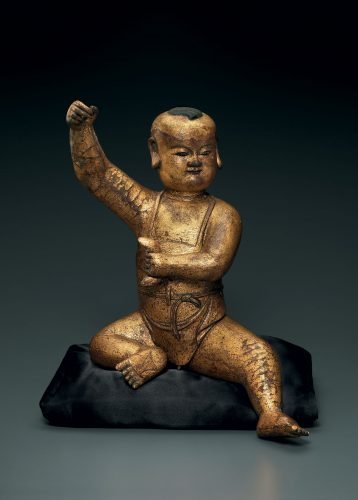 Provenance: From the collection of a French diplomat living in Beijing during the early 1900’s.

This figure in the round of a young boy is carved sparingly, the emphasis on broad smooth planes and generous curves to suggest a sturdy plump body beneath taut youthful skin, rather than on precise, descriptive anatomical detail, except in the broadest sense. The boy sits upright with one leg bent, the other pendant, the feet plump and toes well-articulated. The left arm is held across his body, the hand grasping an ingot as he raises the other triumphantly, his fingers curled as if to hold something aloft. He wears a form-fitting apron barely covering his body, tied with a sash wide in back and secured in a loop in front. While the torso is oriented forward, the head is turned slightly to the left, striking a dynamic but tense and rather haughty pose. The facial features, diminutive in contrast to the large head and full cheeks, are carefully executed with a broad nose, small full lips in a very slight smile, long almond-shaped eyes and ears with long lobes that are slightly turned out. The head is shaved, as was the Song style, with a comma-shaped patch of hair painted in black lacquer on the crown. The surface overall is dark reddish brown from the lacquer coating with an overlay of fine gilding, some of which has worn off, while some areas along the left leg and the right arm have developed superficial cracks.

A new humanistic approach to the representation of children had come to the fore during the post-Tang period in the arts of China and the present young boy is a manifestation of that course. While figures of children, and male children in particular, appear in all media, engaged in various activities, a number of them relate to the present sculpture more closely than others. Surprisingly, a small Ding-ware ceramic water dropper in the form of a young boy embracing a goose might have been our golden boy’s brother (fig. 1). The head shape and physiognomy that the figures share are not uncommon within this extended family. However, the small pursed lips pressed up close to the wide noses and the plump protruding chins are rather distinctive features. The figures are further related by way of their very simple garb—their apron-like garments—as well as their hairstyle. They are joined by a group of ceramic figures from a Northern Song tomb excavated in Zhenjiang in Jiangsu province and particularly to one of the boys who is seated and posed in the same tense and alert fashion as the present wooden figure (fig. 2).

While the Ding kilns are known for most engaging and beautifully crafted pillows in which a recumbent male child supports the headrest, the potters working at various kilns spread over several provinces in the north specializing in so-called Cizhou or slip-decorated stonewares also exhibited a great fondness for the subject, and at least one pillow base is in the form of a youth who easily joins the present brotherhood (figs. 3-4), while another Cizhou pillow, with sgraffiato design, features a young boy holding a lotus in one hand, a fungus-like scroll in the other with either silver ingots, or papers folded in ingot form, strewn about him (figs. 5-6).

Although a small bronze Buddhist adept in the Metropolitan Museum (fig. 7) is older in appearance than the youth hewn from wood, the adept’s seated posture and raised right arm are akin to those features of the wooden figure, and despite their seated postures, both exhibit a great sense of latent energy and potential movement that makes each of them quite engaging. The writers of the Metropolitan catalogue where the bronze image is published note the unusual position of the right hand that is held close to the head, and draw parallels to the fierce guardian figures of the Buddhist faith.[1] On a similar note, the raised arm of our wooden boy here brings to mind images of the “first bath of the Buddha,” a subject depicted in China by painters and sculptors alike. The spirit and energy of these figures with their arms aloft are shared by the figures represented in a group of ceramic tiles that are truly sculptural in nature, images that while only around a foot and a quarter high look quite immense, two of them illustrated here (figs. 8-9). And, finally, a single figure will have to suffice from an extremely rare group of wooden lohan from the Northern Song period preserved at the Nanhua Temple in Guangdong province to bring us around to the material at hand (fig. 10). The execution of the exposed head, shoulder, arm and hand easily relate to the golden boy. Since early wooden images are so rare in China, it is through comparisons with other materials, however, that we are able to arrive at an approximate date for the present figure. 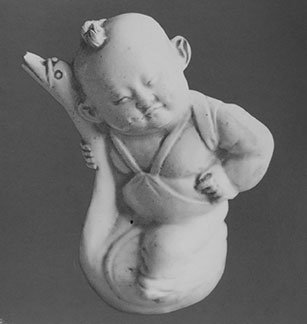 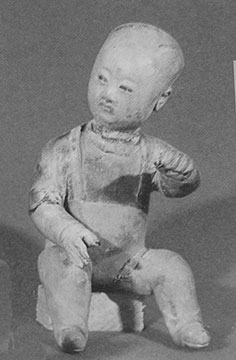 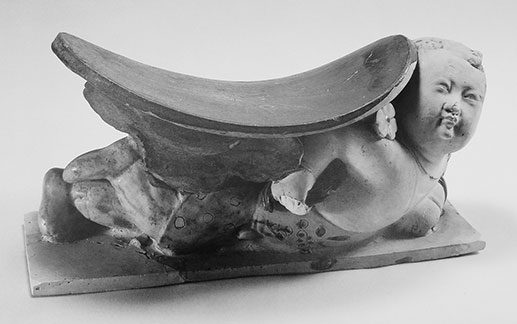 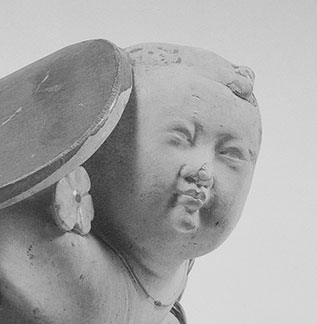 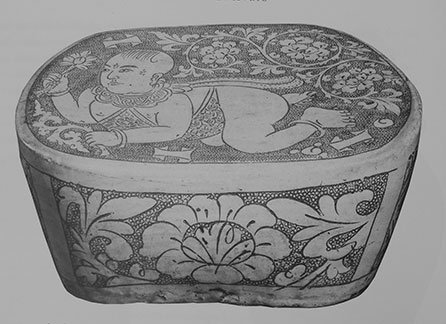 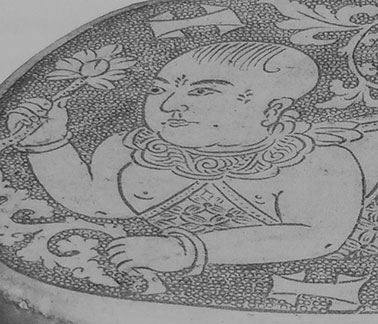 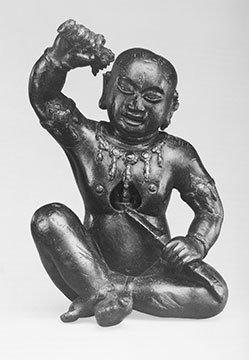 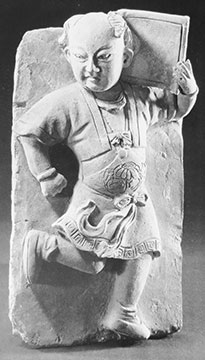 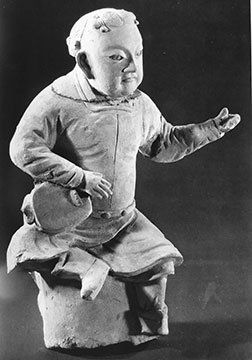 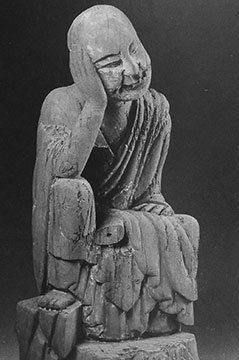