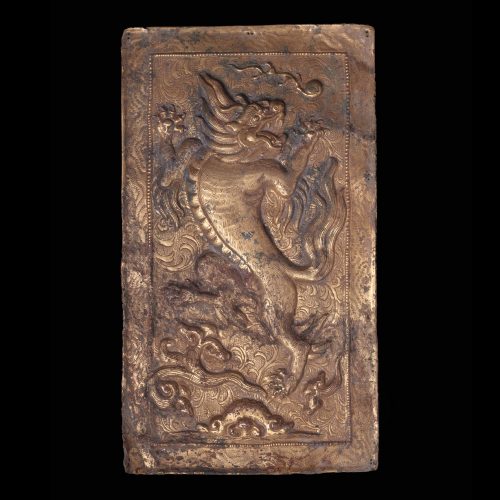 The figure of a rampant lion is hammered in low relief on a thin rectangular plaque. The lion’s massive head is twisted rearward with mouth agape. the mane swept up behind the two horns. His pelt is indicated by rows of striations and dotted circlets and “Y” formations. Balanced on one leg the lion reaches for a flaming pearl above on a ground of etched fronds scrolling on a ring-punched ground within a “pearl” border and undulating ring-punched lines on the frame. Pairs of holes are pierced along the border for attachment.

The migration of the substance and trappings of the Buddhist religion from northern India across East and Southeast Asia was an epochal one, impacting the societies it entered to the present day. Associated with the tales, history, philosophy and beliefs of Buddhism were their physical manifestations, the symbols that became the treasure trove of artists across Asia. The lion, the subject of the plaque here, derives from the patrimony of Shakyamuni Buddha, descendent of the Shakya or lion clan. A regal aura is appropriately imparted to the present beast through its heraldic rearing. Interestingly, floating in front of the open jaws of the lion is a pearl-like object trailing flames, the bounty of the Chinese dragon, and the lion paws are splayed displaying 5 claws, miming the East’s imperial dragons.

Tang metalworkers established a path that the Liao admirably followed. A similar plaque in the Los Angeles County Museum was attributed to the Tang period and if that dating is correct the piece provides a very direct precedent for the present plaque. A pair of similar objects sold at auction in 2018, however, was ascribed to the Tang-Liao period, the uncertainty there reflecting what good students the Liao craftsmen are thought to have been.