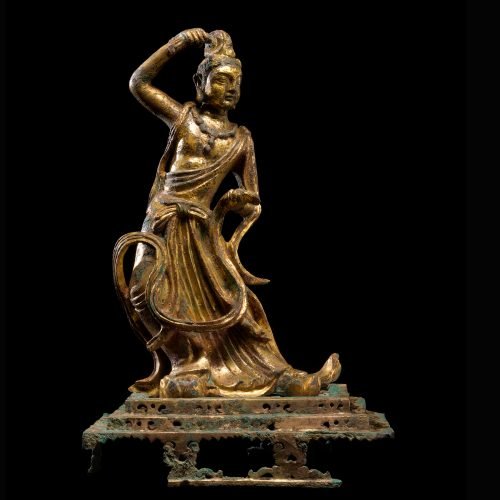 Gilt-bronze Figure
of a Dancing Bodhisattva

The graceful figure seems caught in the midst of a dance, each foot alighting on a lotus blossom. The right arm is raised forming a beautiful arc and the left hand holds a swirling celestial scarf. The deity is youthful with serene facial features and hair swept up in a high curl secured with a bejeweled floret. The robe covers the left shoulder and falls across the bare chest adorned with a necklace. Tied with a generous bow, the skirt falls to the bare feet. The figure is raised on an associated pedestal cast with foliate openwork.

Given the size and intrinsic beauty of this bodhisattva one can only imagine the spectacular grandeur of the original tableau, assuming it was intended to flank a larger image of the Buddha. Such a Buddha would have naturally been staid in bearing and demeanor while the attendants, like the present figure, serve in artistic compositions as animated and graceful foils as well as the gleeful souls buoyed by the presence of the spiritual master. The contraposta posturing, grace and stamina along with its ebullience and expansive energy are among the features of sculpture produced during what is known as the High Tang and perfectly manifest here.