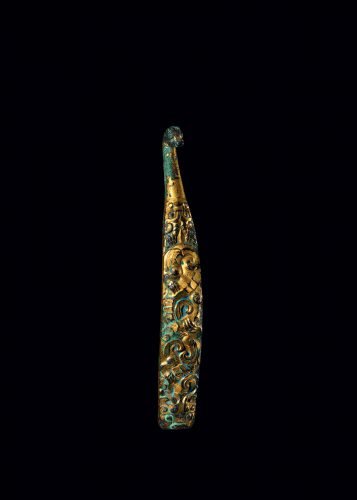 The belthook is heavily cast, boldly decorated, and generously gilded with a complex pattern of two burly dragons on a bowed shaft that terminates in a dragon-head hook. The use of belthooks popular in China was a fashion borrowed from nomad military garb. The nomadic ancestry of the rulers of the Zhongshan kingdom is manifested in the brute strength of this style and, even more captivating, by the gold surfaces.

In today’s art market a solid provenance can certainly enhance a work’s value. This generously gilded bronze belthook was included in the Venice Exhibition in 1954, a catalogue that every student of Chinese art history knows well making the piece not only well documented but one of the first glimpses for museum audiences in the West into the grandeur of Chinese design and workmanship for the elite.

A belthook similar to the present was excavated in Pingshan county in Hebei province some twenty years before the princely tombs of the Zhongshan kingdom of the Warring States period were discovered there (fig. 1). The features and execution of the present and excavated belthook—an asymmetrical design and rather convoluted composition anchored by the symmetrically placed heads of the dragons, in boldly cast relief—are shared by another example, one illustrated by Jessica Rawson and Emma Bunker in Ancient Chinese and Ordos Bronzes (fig. 2), an exhibition and study that brought into focus the importance of the inner Asian frontiers of China. The use of belthooks was, in fact, a tradition borrowed from nomad military garb, the nomadic ancestry manifested in the brute strength of this style, while at the same time the rich gold surfaces making a statement understood and embraced by the elite.