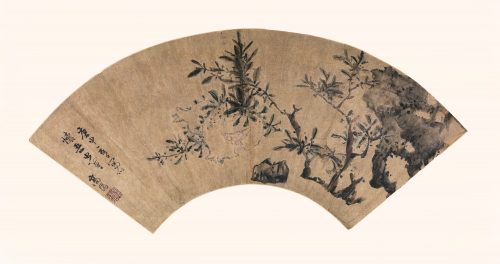 Inscription:
“During a summer day of the year 1620,
Painted for Master Huaiwu by Gao Yang.”

Several pomegranate fruits hang from a branch growing at the foot of a rocky slope, the plant leaning leftward to locate the ripe and heavy fruits in the area of greatest visual important, the approximate center of the composition. The half-open fruit in front hints at the numerous tzu or seeds within, which in Chinese is homophonic with the tzu meaning sons, hence the well-established connotations of the fruit as symbolizing abundance and fertility. The painting was thus probably intended for presentation at Master Huaiwu’s wedding, designed to express in pictorial form the wish that his union be blessed with progeny for generations to come.

Gao Yang, zi Qiufu, hao Kuian, was born in Siming, the modern Ningbo in Zhejiang province. Although Gao’s first specialty was portraiture, when the head of the Bureau of Ceremonies in the Ministry of Rites requested Kao to paint a portrait of the official’s father, the request was couched in such rude terms that Gao, rather rashly as it turned out, replied in kind. Highly insulted, the man then brought action against Gao with the civil authorities—a case that Gao, a commoner, was certain to lose—so he moved permanently to Nanjing, giving up portraiture and concentrating instead on painting landscapes, flowers, and rocks.

During Gao Yang’s later years, he was associated very closely with Hu Zhengyan (1584-1674), a seal-carver, calligrapher, and painter from Anhui province who in Nanking enjoyed an extraordinary career as publisher of block-printed illustrated books during the final decades of the Ming dynasty. For Hu’s first major publication, the Shizhuzhai shuhuapu, Gao contributed designs for paintings of blossoming plums, flowers, stones, and bamboo among other subjects and also served as co-editor of the publication. His father-in-law Zhao Bei also worked on the project as did his brother-in-law Zhao Long and his nephew Gao You.

The date of Gao Yang’s death is not recorded in standard sources. His latest known paintings are dated to 1631, when he had been painting professionally for at least 58 years and was thus most likely in his late 70s. In 1644 Kao’s designs played a prominent role in another of Hu Zhengyan’s publications, the Shizhuzhai jianpu but it is unlikely that Gao was still alive at that time. His style of painting had direct influence on his nephew, Gao You, and on a pupil named Zhang Yi. Indirectly, however, through the various books that were illustrated with his evocative designs, Gao Yang’s influence extends down to the present day.