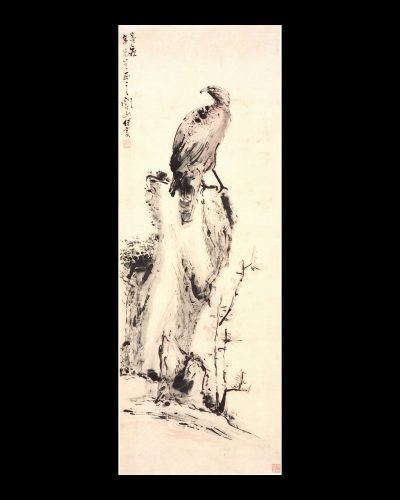 Inscription: “A work in ink presented for the judgement of Master Nian by Fu Wen of Lushan.”

The fierce bird of prey and its environment were created with a painter’s brush and a split fingernail as well. The result is the image of a creature that is rugged, unrestrained, rough and ready, and perhaps reflects something of the artist himself. Fu Wen was born in Shenyang, the capital of Liaoning province, into a bannerman family, the banner system instituted by the founder of the Qing dynasty as a means of social, administrative and military organization and control. Fu’s banner was charged with defense of the capital, Beijing, and it was there where he might have met the finger-painter par excellence, Gao Qipei (d. 1734), also a bannerman stationed during the later years of his life in Beijing. Fu eventually painted at the behest of the Qianlong emperor and seems to have had close ties with the imperial family.

The 18th century text Duhua jilue observed of Fu Wen that “military administrators are men of the world, so he excelled at banter and joking,” and further he “excelled at poetry and painting and in everything was quick and sharp-witted and within a short time could complete several tens of scrolls, and his inscriptions to were not commonplace.”