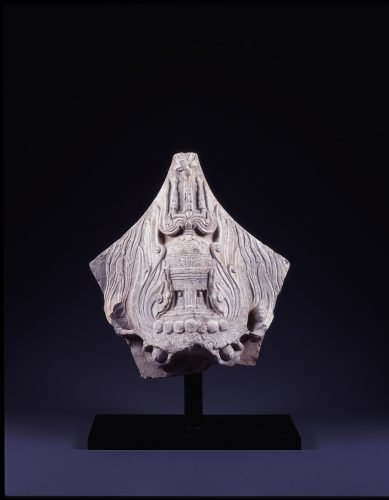 Fragment from a Buddhist
Limestone Stele

The fragment is the apex of a limestone stele finely carved in the center with a depiction of a pagoda with high domed roof above a stepped lintel surmounted by a grand trident-shaped finial, carved with deep niches of lotus-petal form below, each containing a seated Buddha, the pagoda framed by deeply sculpted acanthus-style leaves, supported at the sides and held aloft from below by apsara (Buddhist angels) and surmounted by an elaborate finial topped by a regal bird with wings outstretched, and supported on a stepped platform raised on seven orbs.

The Buddhas here, similar to their appearances on stele of similar material and style from 6th-century Shandong province, represent the culmination of a glorious event in Buddhist lore in which Prabuteratna–a Buddha of the distant past and believed to manifest in his body all past Buddhas–summoned Shakyamuni, the historical Buddha, to share his throne and his glory, and, according to some, to preach the “Lotus Sutra” that it might fall on the ears of Prabuteratna. The elevation of Shakyamuni into Prabuteratna’s “Precious Stupa,” was accompanied by countless and multitudinous Buddhas from the past filling the sky in every direction, an event proving that Shakyamuni himself was the eternal, unifying Buddha.

A stele in the Freer Gallery of Art, produced during the Six Dynasties period when the miracle was of greatest importance in Chinese Buddhist belief and practice, is devoted fully to this theme with Sakyamuni and Prabuteratna not only as the main figures, but their personas depicted twice, once in the pair of Buddhas above and another pair in the stupa floating towards the apex (figs. 1-2). The fragment here preserves an elegant 6th-century sculptural style while also perpetuating a compelling account from Buddhist lore. 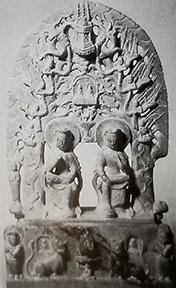 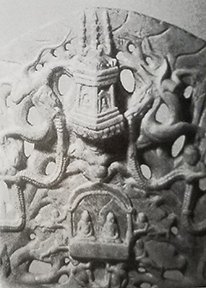