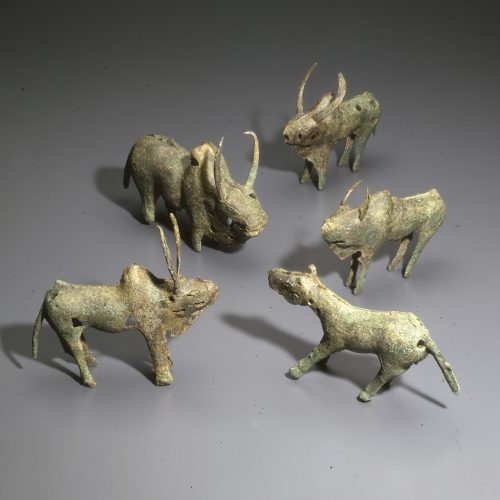 The four bulls are hollow-cast in bronze with thin rigid walls, each figure with a rough seam extending the length of its back, the bellies opened, and the sides and necks cast with large irregularly shaped apertures occurring predominantly on one side of each of the figures. Folds of skin hang low and jagged from the throats below the humped necks while the narrow tails descend from the curved rumps. Long slender horns ascend in arcs from the roughly modeled heads cast with nose bridles, a sign of domestication. The fifth animal is similarly cast but with equine features and demeanor. Patches of green patina are visible on the dark grey surface of the figures.

The kingdom of Dian emerged in the area of Yunnan province by around the 6th century B.C. and experienced a cultural and economic blossoming, particularly during the 3rd to 2nd centuries approximately when the present figures were produced. Long-horned bulls, sometimes appearing with horses important in the care and control of cattle, figure prominently in the bronze art of craftsman of the Dian. One burial contained fifteen individual bronze images, including a bull and a horse along with other domesticated animals, obviously important to a culture dependent upon animal husbandry. Bronze containers fashioned to hold cowries, the tender of the time, are celebrated especially for the decoration of their lids where groups of expressively modeled oxen and horses are gathered.[1] Also among the well-known images of bulls produced in Yunnan are those locked in combat with tigers and snakes in the openwork designs of bronze belthooks. Exactly in what manner, however, the apertures in the bodies of the animals here functioned is somewhat of a mystery. Conservators have suggested they were likely used to attach the figures to a lamp or some other construct. The animals as individuals are quite compelling and one can only imagine the impact they would have had in such a context, while here they serve to symbolize for us the year of the metal ox.