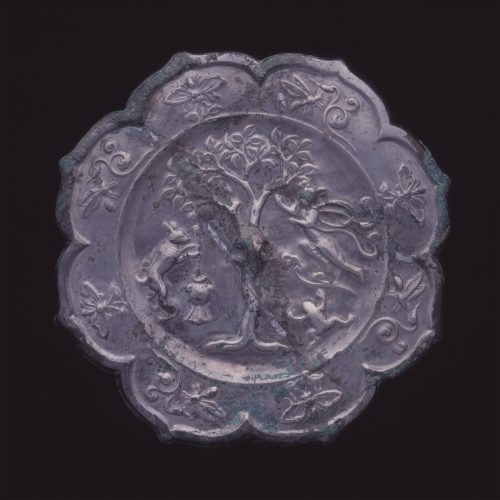 The mirror is cast with a raised eight-bracket rim enclosing a narrative scene with a large cassia tree in the center between a rabbit pounding elixir and a sylph-like figure floating above a leaping frog. Eight moths encircle the scene all in high rounded relief. Each component of the design is depicted in high rounded relief, each motif appearing three-dimensional, substantial and complete despite the absence of minuscule detail, and all against a plain recessed ground. The reflective side of the mirror is flat and has encrustations of patina that also adhere to the decorated side.

The “Palace of the Moon” was one of the few narrative subjects to have entered the repertory of mirror décor during the Tang. The popular tale depicts the origin of the phases of the moon where the hare resides, pounding the leaves of the cassia tree with mortar and pestle to produce the elixir of immortality. The rabbit is a companion of the Moon Goddess, Chang E, who is said to have been transformed into a toad (the image lingering below her on the mirror), and the creature credited with devouring the moon piecemeal, accounting for the lunar phases.