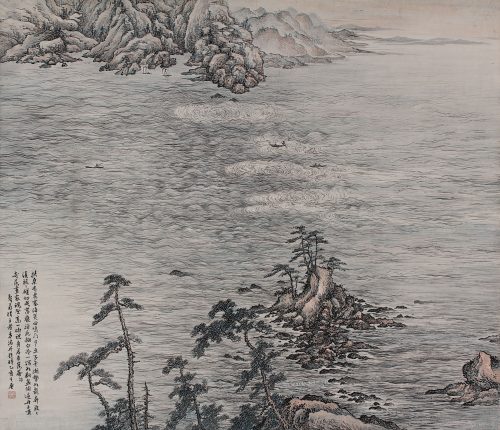 Inscription:
“In Japan there is a fortress-like pass,
the strait called Naruto;
Each day at noon and midnight
the tide comes like a rushing dragon.
Turning round and round,
it makes a whirlpool;
Blue waves splash white and cold,
pouring down like an overturned plate.
Dangerous and narrow, the boat men lament,
its strangeness requires the soul of a painter;
Climbing high and looking around,
one feels as though in the K’un-lun Mountains.

Master of the Ts’an-chu Retreat, Fang Ming (painted this)
and also inscribed a poem during spring of the year 1935.

The Naruto whirlpools are tidal whirlpools in the Naruto Strait, a channel between Naruto in Tokushima and Awaji Island in Hyogo. About 1.3 km in width, the strait connects the Pacific Ocean and the Inland Sea. The tide moves large amounts of water into the Inland Sea twice each day, and also removes large amounts of water twice a day. The tide creates a difference in the water level of up to 1.5 meters. Due to the narrowness of the strait, the water rushes through the Naruto channel at a speed of about 13-15 km per hour; during a spring tide, the speed of the water may reach 20 km/h, creating vortices of up to 20 meters in diameter.

The artist of the present picture chose the view from Awaji Island and captured with great brilliance the turbulent flow of the water and the large and dangerous whirlpools created by the changing tide. Well might the boatmen who challenge the awesome forces sigh and lament, as is noted in the artist’s poem. However, each of the two small boats positioned right next to the whirlpools carries a passenger, and these may be tourists, out for a thrill, the same as is frequently seen even today.

Fang Ming, tzu Tzu-i, member of the eminent Fang clan of Anhui province, traveled to Taiwan in 1890, where his uncle was prefect of Chi-lung. Fang travelled to Japan in 1924 and resided in Kobe, near Osaka. The present painting, dated to 1935, was thus done while Fang Lo was resident in Japan and was intended to appeal to an international audience, much as it does today.