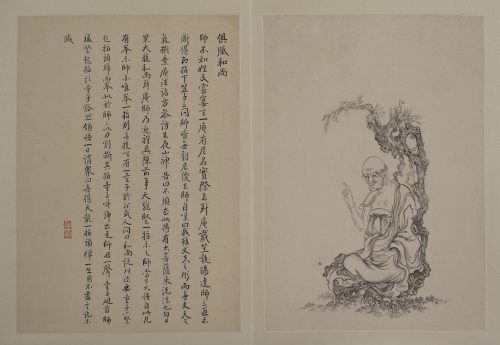 “Patriarchs of the Chan (Zen) School of Buddhism”

Each of the twenty-one pictured patriarchs is portrayed in an album leaf on the right and identified in a biography on a leaf to the left.1
The figures are executed in baimiao style, in ink alone, with the figures generally isolated—two figures appear together in only one leaf—and are further characterized by various accouterments they hold as well by their environments. The drawing is sensitive, used with some wash to excellent effect, and serves to create personalities for these paragons from the distant past.

The artist, Fan Tingzhen, was born in Wujin, the area in Jiangsu province that also produced his most prominent predecessor and model, Yun Shouping (1633-1690). During the early 17th c. and the late Ming era, the province was the center for the printing of books with wood-block illustrations. Fan Tingzhen was certainly familiar with one of these, the Xianfo Qizong published by Hong Yingming in 1602, because the images and text of his album here were based fairly directly on the earlier publication (figs. 1 and leaf t). That text was also transmitted to Japan where it influenced many artists, including Nonomura Sotatsu (?-1643-?) (fig. 2.) The theme of this exhibition is “Parallel Lives,” an idea of which this is a perfect example: an early 17th century Chinese image influencing both a later version in China and yet another in Japan.