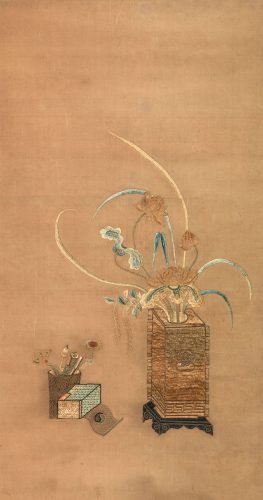 The silk hanging scroll, now framed and covered with glass, is embroidered with a cong-form vessel in satin stitch on a stand issuing lotus blossoms worked in Peking knot with two-tone blue and green satin-stitched sinuous stems and lotus leaves. A brush pot is stitched in couched gold to resemble wood grain and is filled with a Peking knotted ruyi, a very fine ink-tipped brush, a scroll, a peacock feather and a chrysanthemum. Next to the brush pot is a stack of books in laid stitchwork with the cover open to reveal a yinyang symbol.

All of the elements that make up the tableau here would be familiar to a Chinese intellectual and anyone knowledgeable about his world. The scroll pots used by the literati were usually made of wood, sometime the beauty of the grain brought out through polishing, with no further carving or ornamentation necessary and it is such a pot that the present image conjures and is similar to the jichimu brushpot earlier in this exhibition (cat. no.32). The contents of this vessel are meaningful in the first place because they convey the ‘collecting’ nature of the gentleman-scholar and in second place the multi-functional utility of the brush pot is revealed, and further because each item also has symbolic value. The ruyi ‘wish-granting’ scepter is a sign of status and an auspicious implement, but normally enjoyed simply as an eccentric object when fashioned, for example, from an eccentrically twisted root (see cat. no.40). The brush is a necessity for the calligrapher and painter; the chrysanthemum, symbol of the poetic spirit of the reclusive and principled gentlemen since the epitome of that spirit, Tao Yuanming, embraced this flower in the 3rd century A.D.; the peacock feather a symbol of dignity and status and a beautiful pennant anyone might pick up and admire knowledgeable or not of its traditional symbolism; the books stacked against the scroll pot, ready to hand with the protective cover casually thrown back, the symbol of duality embroidered on its surface adding a profound philosophic overtone to the tableaux.

The antiquarian interests prevalent among the scholarly elite are conveyed by the presence of the vase in the form of an ancient jade cong, with its characteristically notched corners. The color of the threads suggests the vessel depicted is a bronze version of the ancient cong, an identity supported by the presence of handles on the side and key fret pattern at the base. The lotus blossom and leaves accompanied by grasses and grains denote purity and plenty on the one hand, the illusory nature of being on another, or simply the desire to be attached, even in a small way, to nature.

In an interesting study, Rose Kerr addresses questions as to how such works might have been used in domestic settings in China, adorning the mansions of the elite where rooms were aplenty, reception halls and private studies, dining rooms and bedchambers, all requiring some form of décor.1 Textiles were often used as furniture coverings, as curtains, or simply as attractive decorative hangings among other functions. Since the form of the present panel does not suggest a specific function, it was likely appreciated for its purely decorative value as a wall hanging, one enhanced by the ideas and qualities its individual and collective images convey.

1. Rose Kerr, ed., Chinese Art and Design: Art Objects in Ritual and Daily Life, New York, 1991, pp. 113-114. Also see Jonathan Hay’s Sensuous Surfaces: The Decorative Object in Early Modern China, London, 2010, for images of the elite seated at their desks on which various antiquarian objects similar to those in the silk embroidery here are displayed, for example, fig. 166, p. 284 and fig. 168, p. 286.