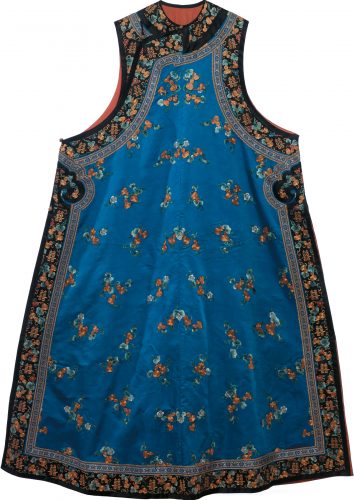 Exhibited: Costumes from the Forbidden City, Fitchburg Museum of Art, Fitchburg, Massachusetts, May, 1989.

The bright blue silk is embroidered with a repeat pattern of couched metallic gold gourds on satin-stitched leafy vines with curled tendrils. Worked in singles, pairs and triplets, the coppery-coloured metallic gold gourds are outlined in black thread and the stems, leaves and blossoms are in shades of blue and green. Contrasting black borders are couched with double xi (“happiness”) characters interspersed with gourds on gold tendrils and with two-tone blue leaves and red prunus blossoms. A flower-and-butterfly patterned ribbon offsets the black borders with ruyi-head shapes at the base of the arm openings. The vest is lined with coral silk.

The brilliant and lively “cornflower” blue is a perfect ground for the dance of the gourds, each holding seeds within its swollen form that promise fertility for the female so garbed. A silent chant resounds from the ribbon borders of the garment….”Happiness-happiness, Happiness- happiness….” and on and on, not just the “double happiness” of the character xi litigated into one symbol, but the symbol invoking a multiplicity of happinesses. Butter f lies swoop into view to form a rebus with the gourds: guadie mian mian,…”may there be ceaseless generations of sons and grandsons.” Butterflies symbolize on various levels the female and conjugal bliss as well as the summer season. Given that the pronunciation of the word for butterfly, die, also denotes the age of seventy, wishes for longevity also abound.

The Manchu military conquest of China was countered by a far more pacifistic yet potent Chinese cultural conquest of the vanquishers. The Manchu leadership knew well the necessity of appropriating Chinese cultural lands—political, economic, and artistic tracts—even as they vigilantly maintained and cultivated the activities, symbols, and places that supported their own ethnic and cultural heritage. The long vest here is an example of where the cultures met.

The vest was an article of attire worn by Manchu women over their long-sleeved, long under-robes in the conquered land where they lived a sedentary life in new palatial surroundings. While the new attire appropriate to their dynastic status was rooted in traditional Manchu tribal wear in form, it was literally cut out of Chinese cloth, woven and embroidered by way of techniques developed in China and emblazoned with images of long-standing significance to the Chinese.

The high-quality materials and workmanship suggest the present vest was court costume, perhaps worn by a new bride or prospective one given the symbolism of its decor. It would have been used as informal court wear and during a time late in the Manchu rule when the strictures governing the colors and motifs of court clothing established at the beginning of their dynasty had become lax. The vest might instead have graced the wardrobe of the wife or daughter of a wealthy merchant, one who had the means to keep his household well appointed and its occupants well attired.

A long vest, with a cornflower-blue damask ground and floral ribbon borders (fig. 1) and another swarming with butterflies in delightful chaos on the main panels of the vest and with further butterflies happily crowding the borders (fig. 2) are ascribed to the 19th century during the late Qing period.

The qipao, also popularly known as cheongsam, the mandarin-collared, sleeveless, slinky dresses we purchase today at such exotic stores as Shanghai Tang, are not descendants of traditional Chinese attire but rather of the long vests such as those here, fashioned originally for the Manchu women of the Qing court.