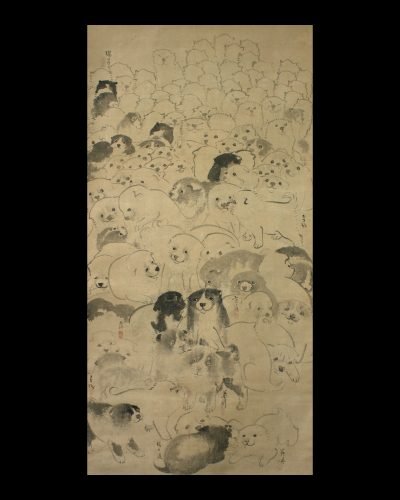 1. “Tachibana Kojun.” 橘公遵; Seal: Shi zai shi ho「志在四方」 (Tachibana Kojun 橘公遵 was a pupil of Okyo, listed in the Maruyama School Painters written around 1794 and also in the 1814 edition of the Heian Jinbutsu Shi.)

7. “Kokei.” 孝敬 Seal: Shi zai shi ho 「志在四方」 (Yoshimura Kokei 吉村孝敬 [1769-1836], son of Yoshimura Ranshu and pupil of Okyo. With his father he served the chief priest of the Nishi Honganji temple and the fusuma-e in the Goei-do there were painted by him.)

A total of eight signatures appear on the painting, presumably placed in close proximity to the portion executed by that artist (fig. 1). Although the composition basically lies within the frontal picture plane, the puppies in the uppermost portion are far sketchier, giving some sense of a recession in depth into the far distance (as well as being easier for the last contributor to complete his portion of the painting.

All of the known artists here were disciples of Maruyama Okyo (1733-95), so it easy to imagine the group heading out for dinner after the studio closed down for the night. Part of the entertainment could well have included a joint painting, with each of the artists contributing his own version of the theme. On such an informal occasion not everyone would have carried his personal seal, hence seven of the signatures are followed by the same seal, one reading Shi zai shi ho (“Aspiring to the Four Quarters” or “Ambition without Limits”), an appropriate sentiment for artists at the beginnings of their career.

Although the work is not dated in the inscriptions, one of the artists, Tachibana Kojun, changed one character of his name during the period 1799-1802; since his signature here uses the initial writing, the work must have been created before that period, perhaps even during the lifetime of Okyo. It is certain that the style seen here was based on that of the master, since it closely approximates a painting done by Okyo in 1784 for the Myogen-ji Temple in Aichi prefecture (fig. 2); it was later acquired by Hara Sankei, who donated it to the Tokyo National Museum. The subject was quite popular among Kyoto painters during the 18th century and also appears within the oeuvre of such Nanga masters as Yosa Buson (1716-83) (fig. 3) and Ito Jakuchu (1716-1800) (fig. 4). 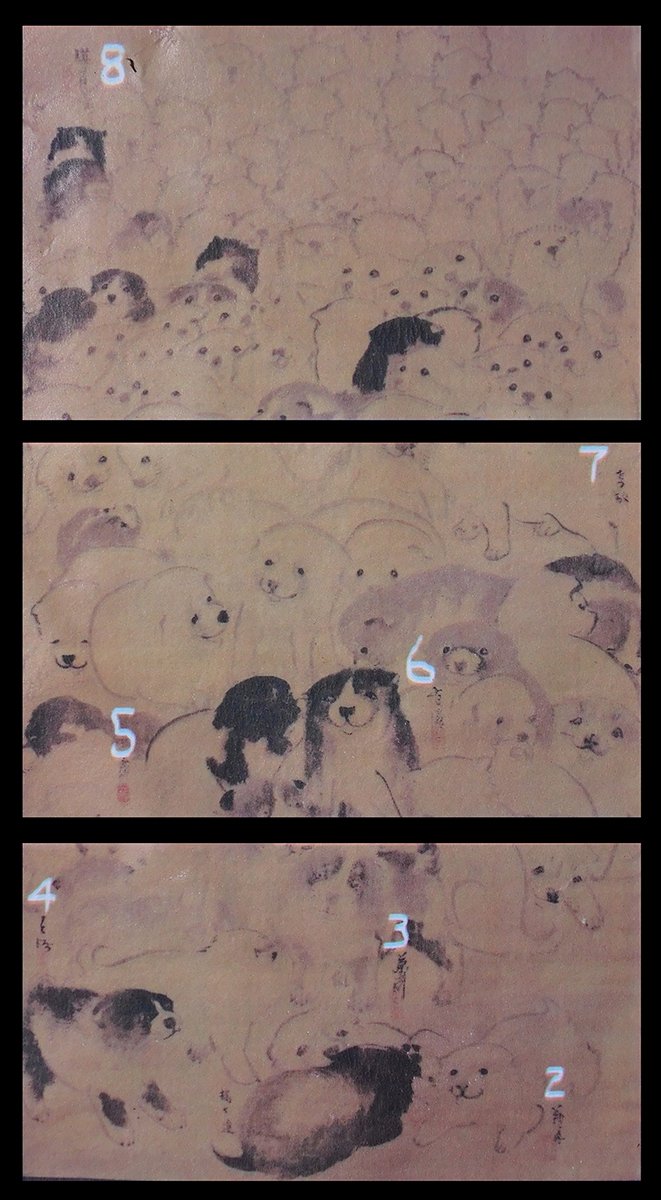 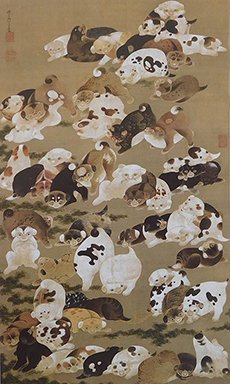