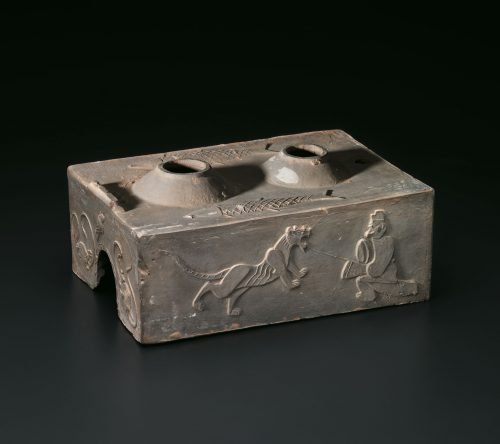 The stove is of rectangular shape, slab-built with open bottom, each slab molded with a relief design before assembly, one side with an open arch-shaped entrance to the fuel chamber, the top pierced with a pair of open-domed burners, a circular chimney aperture at one end and three small raised bosses in front of a small ledge on the other. A pair of fish on the stovetop are molded in low rounded relief, each marked with shallow criss-crossed lines indicating scales and laid out lengthwise on opposite sides of the burners. This domestic turn gives way to the molded images of the siling, the ‘four spirits,’ decorating the sides of the stove. A sinuous dragon, the ‘Green Dragon of the East,’ is being fed by a peaked capped figure on one long side of the stove while the opposite is decorated with the ‘White Tiger of the West’ being taunted by a heavily clad figure in profile. On the front of the stove two identical images flank the opening to the fuel chamber, tortoises with snakes coiled round, each representing the ‘Black Warrior of the North,’ while an owl, peering mysteriously outward, perches on top of the arch. A bird with long-plumed tail and feathered wings, the ‘Red Bird of the South,’ occupies the far end of the stove, opposite the fuel-chamber doorway. The designs were produced crisply and clearly in low flat relief and detailed with grooves and sunken lines along with thin-line or string molding. The grey pottery is fine-grained and quite smooth with bits of white pigment remaining in random places on the stovetop.

The Han dynasty (206 B.C.-A.D. 220) was a time extraordinaire on many levels. Sweeping across far expanses of desert and forested plain, high plateaus and ragged peaks, to the far west where the light of Han life touched even Rome, to the far north where Han Chinese lived and died in present day Korea, and southward to present day Vietnam. The world of Han, immense and powerful, complex, engaging, also made its way full force into the netherworld. Never before had so many aspects of life, of the here and now, been mirrored in the abodes of the dead in China as during the Han. Some tombs were equipped with vast assemblages of lacquer ware and metal, but mostly of ceramic wares representing necessary appliances and accoutrements, attendants and entertainers, barnyard animals and pets, fantastic beasts and battalions of soldiers, sufficient, or more than sufficient, it would seem to secure a successful, content life in the beyond.

While ritual cuisine was part and parcel of tomb preparation prior to the Han, a far more domestic perspective was introduced into Han funerary paraphernalia. Images of butchers slaughtering animals and seated in front of their chopping blocks or working at their stoves appear in pictorial and sculptural form in Han tombs. Ceramic models of cooking stoves appear so regularly during the Han and early post-Han period that one assumes the stove to have been a sine qua non of the well-appointed tomb of the times. Western Han (206 B.C.-A.D. 8) examples were produced from earthenware, most frequently with molded designs and left free of glaze, as in the present and a similar example also depicting the siling (fig. 1). During the later Han these pottery or earthenware stoves were also molded but characteristically coated with a green glaze (fig.2) and again in the early post-Han period when burial furniture still followed in the footsteps of the Han, unglazed earthenware stoves, frequently reduced to a single burner, were the fashion for funerary furniture (figs. 3). At the same time glazed stoneware models of stoves and other mingqi were produced at the Yue kilns. While rectangular and horseshoe shaped stoves are most common, other forms were produced and among the more unusual types is an L-shaped unit which was found with kindling ready for the fire (fig. 4).[1]

The two fish atop the present stove waiting to be prepared, all plump and delectable, hold the appliance in the here and now. However, the subject of decor on the four sides associates this and similarly decorated household wares with a larger, far-reaching supra-reality. The directional animals, each holding sway over its spatial quadrant, are emblazoned on the sides and the stoves likely meant to be placed in the tombs so that the creatures would face their respective directions. The human figures—or are they sprites?—interact with the creatures on two of the sides and a third interloper, an owl, perches on another. The owl is associated with death, its call reminding one of the sound of a grave being dug or of a voice summoning the soul, and thus casts a pall on the construct that otherwise exhibits a sense of anticipation of fine meals to come in the everafter, where the magnificent obsession with food—part of the Chinese identity in this life—was expected to remain undiminished.

The siling, seen in the main image as well as details here of the three other sides of the stove (figs. 5-7), were the most powerful creatures in the Han cosmogony. It at first seems anomalous that the mighty dragon and tiger would be confined with humans or sprites as they are here. The conjunction of these creatures with man or man-like beings could signify a universal or cosmological unity where various levels of being exist in a single continuum, where the continuity between life on earth and life within the grave is a given. The divine siling associated with what is essentially a mundane item effectively manifests the merging of worlds that we might more naturally deem remote from one another.

The bodies of the creatures are sleek and svelte due to the flat and very sharply articulated raised relief, with string-relief detailing that is spare but so perfectly placed that any more would seem too much. This clear, stark style informs the work not only of the ceramic craftsman, exemplified in ceramic architectural elements including bricks and pillars, but also that of the stone carver (fig. 8). The overall design and each detail are easily appreciated in the present ceramic in part because they are not obscured by glaze.

1. This ceramic stove was found among the tomb furniture of a male whose well-preserved corpse was also discovered, a discovery made some four decades after the first preserved corpse, that of Lady Dai , created such a sensation within the world of China specialists. It is noteworthy that even within such elaborately prepared tombs, furnished with all manner of items made of lacquer in particular, the far more modest earthenware granaries, cooking vessels, and stoves also had their places. 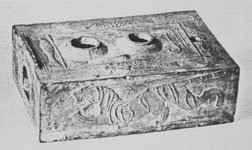 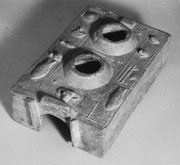 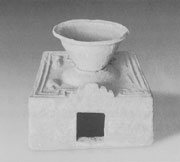 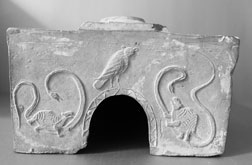