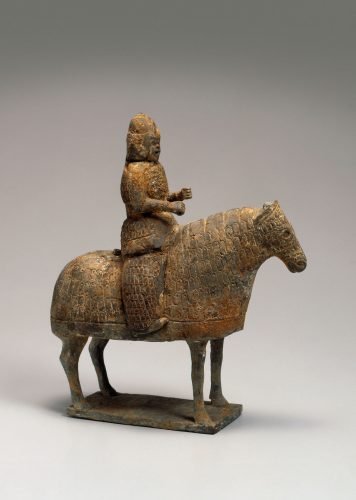 The ancient warrior is seated astride his resolute horse ready for battle with clenched fists raised as if to hold reins. He wears a domed helmet with protective earflaps that frame a face caught in a menacing grimace, mouth open to shout orders or posed to cast fear in the adversary. The mold-cast rider and his stead are well fortified by thick armour depicted by incised lines and carved grooves to indicate a lamellar construction, the simulated leather or iron plates aligned in precise rows with holes for linking the pieces together. The breast and back plates of the cavalryman’s body armour are fastened across the shoulders and cinched at the waist, covering an underjacket, with similarly constructed full-length chaps falling over his legs. Similar armour intricately detailed in rows with prominently rendered fastening holes completely shields the horse’s body, a wide hem at the bottom, with the head and face guard indicated as a separate piece, the holes for the eyes reinforced by wide circular frames. Triangular flaps shield the tail while a circular fixture to hold a plume is centered on a star-shaped motif on the rump of the horse. The bulky body of the horse, standing foursquare on the rectangular base on thin legs, might have been modelled over a metal frame or skeleton. Traces of white pigment remain on the grey earthenware that is also patched with yellowish-brown discoloration.

The figure represents a member of the Tuoba tribe, a branch of the nomadic Xianbei of the steppe, who invaded and conquered a swath of northern China in the 4th century A.D., ruling as the Northern Wei dynasty from A .D. 386 with their capital located in Luoyang in Henan until moving to Datong in Shaanxi province in A.D. 494. The ceramic militias of the deceased, from the time of the first emperor Qin Shihuang (259-210 B.C.) onward, reflect contemporaneous traditions in the arms and armour of the real world, of Chinese domestic forces and that of invaders and conquerors. The nature of war-torn northern China at this time is indeed reflected in the prevalence of military personnel within tombs there, deemed necessary to protect the dead and their treasures.

Although laminate or plated armour for warrior s was used by the armies of the first emperor, a style that continued through the Han (206 B.C.-A.D. 220), it was in the post-Han period that horses and warriors alike were fitted with heavy armour constructed of metal, and, especially for horses, lacquered leather. Referred to as scales, plates, or lamellae, the small pieces comprising the armour are represented here in ceramic horses with armour depicted by way of painting (fig. 1), incising and stamping (figs. 2-3), the last example here also coated with glaze.

The use of such heavy armour by the cavalry was made possible by the adoption of the stirrup, considered the real game-changer in military might in east and west alike—in China by around the 4th century A.D. A heavily clad warrior was able to mount his horse despite cumbersome and weighty garb and importantly was given the means through this simple device to exercise great control over his vehicle, rider and mount becoming a closely integrated war machine. The stirrups are visible here in figures 1 and 3.

The rectangular stand supporting the present horse and rider and all but one of the comparative images was a 4th-century invention. Such stands provided both physical support and a pedestal to frame the image aesthetically. It appears the invention of the stand and the creation of horses with slender legs are related.

The horse and rider here share the dark grey earthenware bodies of contemporaneous tomb sculpture in the north and also exhibit the common tendency for the surface to turn a yellowish-brown color. Lastly, a most intriguing mannerism of the period is in the facial features and expressions of the humans of the Northern Wei period, usually military personnel. The wide eyes and large noses are clearly non-Chinese while the grimacing faces, squinched and puckered, almost like gargoyles, must be the products of very active imaginations (figs. 4-5). 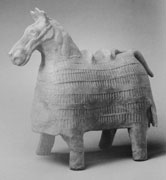 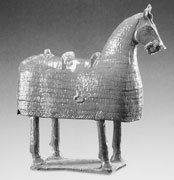