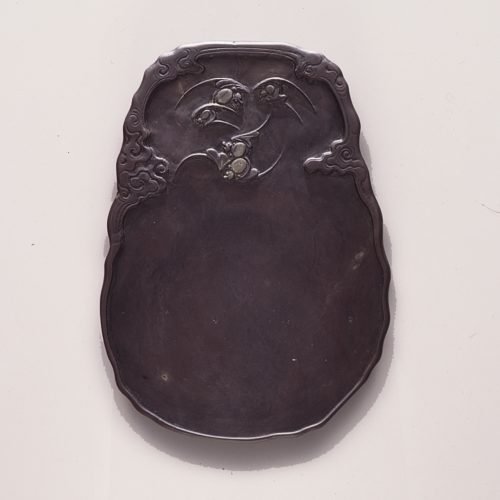 The inkstone was an implement developed for calligraphers and painters in China and used throughout East Asia by those whose crafts depended upon the use of ink that was produced in the form of an ink stick. By grinding an ink stick against the flat, smooth surface of the stone with a small amount of water, solid ink was transformed into a usable liquid. Among the stones preferred for fashioning this tool was one called Duan after a prefecture in Guangdong province, which was the primary source for the material. Duan is a compact, igneous rock that can be worked and polished to provide a perfect grinding surface. At the same time the dense composition of the stone allowed the craftsmen to carve intricately detailed designs. Duan stone was further notable for its dark purplish hue and small green-colored mineral inclusions, or “eyes.”

To form the present implement the stone was shaped into a flat, approximate oval form. The upper surface was outlined with a narrow, slightly raised carved rim following the perimeter at one end as a means of confining the water on the grinding surface and continuing to the opposite end where it morphs into scrolling cloud motifs framing the images of five bats (wufu) in raised relief. The natural mineral inclusions characteristic of the stone were used to great artistic advantage as the airborne bats are each produced with finely carved curved wings emanating from a green “eye” which serves as its body. The cloud border is not uncommon in inkstone décor and here, along with the dark color of the stone, provides a perfect environment for the nocturnal creatures.

The pronunciation of the word for bat in Chinese, fu, is identical to that of the word for good fortune, fu. Further, the wufu signifying the five bats present in the decor is homophonous with the wufu meaning “five blessings”—longevity, wealth, good health, love of virtue, and a peaceful demise. The owner of the inkstone, while a learned individual to be sure, was also raised and schooled in a world of mystic beliefs and superstitions and would have hoped to be the recipient of the good omens provided by this implement.