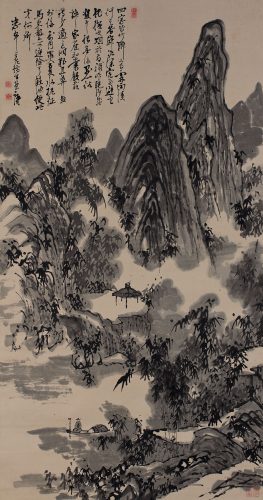 Artist’s inscription:
“At the windows on all sides the bamboo (appear) drunken,
having been saturated for long by continuous rain;
Why have I never felt so bitter and desolate?
the mud being deep guests easily avoid me.
Calling for a pillow I lie and smoke,
trying to make up for last night’s sleeplessness;
Purity begins with my two ears,
and not repeating what is stupid, vulgar, and abusive.
The sparrow’s chirps blend with the sound of reading,
I compose a poem which for the most part meets my intention;
The problems of today I have not touched upon,
insults from the outside remain within.
Summer water hinders the advance of horses,
reports from the east cannot be delayed;
Apart from approaching the ink stone as usual,
how else can my talent be set free?
Goga-jyusei painted this and inscribed a poem.”

Precipitous mountains and groves of bamboo dominate a scene which also includes a figure sitting placidly in a boat in the foreground and a simple pavilion situated on a protruding spit of land in the middle ground. The most salient feature of the painting, however, is the brushwork, which is quick, incisive, and expressive of an impetuous temperament. The entire picture surface is activated by the velocity and strength of the brushwork, which varies from light to dark so as to create some spatial recession as well as pictorial tension between recession in depth and the frontal picture plane.

The artist’s poem, by Doi Goga, refers to events in 1868 that he had experienced and to which he here responds. In the first month of the year, a battle broke out near Kyoto between the Tokugawa Shogunal forces and supporters of the emperor. Although the Tsu domain (now Mie prefecture), which Goga served as a Confucian teacher, initially supported the Shogun, it suddenly changed sides, convinced to do so by a messenger from the Emperor, resulting in a rout of the Shogunal forces, The battle line then moved east to Edo and to the Tohoku region; in the fourth month Edo castle was taken by Imperial forces.

This turmoil, and the uncertainty of the outcome, undoubtedly is manifested in the painting and the artist’s unrest at the time. Although in his poem Goga says that “The problems of today have not been touched upon,” the “insults from outside” may refer to two skirmishes between foreign troops and samurai that took place in Kobe during the first month of the year and at Sakai during the second month. “Reports from east” certainly refers to news about what was happening in Edo.

Doi Yukaku, called Goga, was born to a doctor who served the Todo clan in Ise, the present Mie prefecture.[2] His father was also the teacher in the Confucian school established by the clan at the behest of the Tokugawa government. Goga is said to have been able to recite the teachings of Confucius when only four, although he often resisted the teachings of his own father. His love of study often kept him in a storage room, where he would read continuously without emerging. After his father and elder brother died, when he was in his teens, Goga became head of the family,a heavy responsibility that led to the even greater efforts on his part that may have caused the loss of sight in one eye.

For many years Goga studied under Saito Setsudo, a Confucian scholar attached to the Tsu Clan who also taught Yamanaka Shinteno (1822-1885). Goga was first a disciple of Setsudo, then his colleague, and finally his friend. Almost dying from venereal disease in 1842, Goga recovered only after three years; in 1845 he became a teacher in his clan school, emphasizing the classics over poetry and literature. Wishing to become an artist as well as scholar, Goga practiced calligraphy day and night for one month, modeling his style on the great Sung dynasty master Huang T’ing-chien (1050-1110).

Stephan Addiss has described the difficulties facing such literati painters as Doi Goga and Yamanaka Shinteno during the late Edo era. During that transitional period, traditional standards and relationships often had to be honored even though the political realities were changing rapidly. The head of his clan asked Goga on several occasions if they should support the emperor or the Tokugawa government in their contest for political authority. In 1867, when the turmoil came to a head, Goga said their first loyalty was to the emperor; however, the clan had been treated well by the Tokugawa and, in addition, the Todo clan itself would disappear if feudal government came to an end. Goga therefore, insisted that the best way to remain faithful to the emperor was to support the Tokugawa. This of course proved impossible. In 1868, the first year of the Meiji Restoration, Goga was invited to join the new government but declined on grounds of poor health. Goga then served the Todo clan until the clan system was abolished, after which he became an independent scholar and painter, free to indulge himself in study and painting.

Goga was described as being a tall man with high-pitched voice who wore humble clothes. He was also noted for a stubborn character such that his mind was never changed once he had decided something. When he was about forty, a friend cautioned him against reading too much, since he had already lost the use of one eye. Goga replied that a scholar could not stop reading books any more than a warrior on the battlefield could refuse to fight because he didn’t feel well.

1. This poem is recorded in the collection of Goga’s poems, Goga-sai shiyo, published in 1806. It is there listed as “After sleep on the 13th day of the 5th month;” since the works are listed chronologically, the poem can be dated to the year 1868. Called “The Day of Drunken Bamboo,” this is the day during which bamboo should be planted.