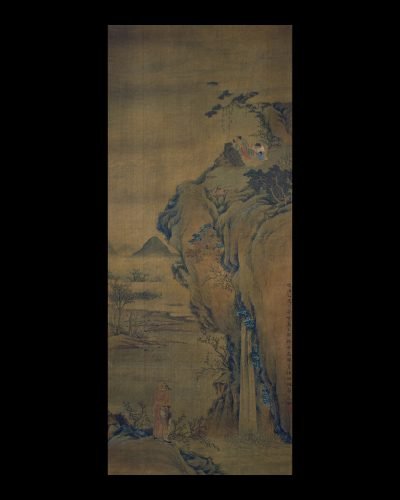 Inscription:
“During the year 1645, the second of the Shunzhi era, on the day of Ascending the Heights (the ninth day of the ninth lunar month) I used the ideas of the monk Taichan and painted ‘The Four Sleepers.’ Yuangong.”

The Four Sleepers can be seen huddled in their idiosyncratic slumber on an outcropping of a peak in a highly unusual and imaginative landscape setting. The eccentric Chan hermit-poet Hanshan, named after the mountain where he resided, is nestled next to the scullery aide Shide, whom the third figure, the monk Fenggan, had taken in when the young Shide was without hearth and home. The fourth of the group is Fenggan’s furry companion, a tiger, an animal favored by holy men in the Chan Buddhist world. While this gang of four appears to have been brought together iconographically during the Song period, the individuals themselves are of Tang-dynasty patrimony.

A fifth figure, however, has entered the scene, adding a further layer of interest. Ding Yuangong painted “The Four Sleepers” in 1645, one year after the fall of the Ming dynasty to the Manchus. Is the odd figure clad in red a surviving member of the ruling Ming family, one longing to leave the dusty world of the present for the peace and safety of the bucolic past? This idea is not as far-fetched as it might at first appear. The surname Zhu of the Ming imperial house means “cinnabar red.” The color here, prominent on the figure’s robe, might be a pictorial device intended to evoke and honor the Ming dynasty, which would not be unusual for a Ming loyalist to do at this time.

Interestingly, the landscape dominates the painting. A dusting of green over the texture strokes on the rocky surfaces is a reference to the ancient blue-and-green style seen through the prism of the lyrical style of Zhao Da’nian (active 1070-1100) of the Song. The composition with the top-heavy scarp climbing one side of the scene with a river valley interrupted by horizontal cloud banks on the other is reminiscent of 10th-11th century river valley landscapes. Yet the rather eccentric character of the mountain is clearly a late Ming attribute. The mountain here further serves as an escape from the dusty world for the four sleepers. Perhaps it is also an escape for a remnant or “leftover” member of the Ming imperial family, here ready to shave his head and become a monk, as did the painter himself. According Ding Yuangong’s earliest biography, the Tuhui baojian xuzhuan of around 1680, “he later shaved his head and became a monk.”