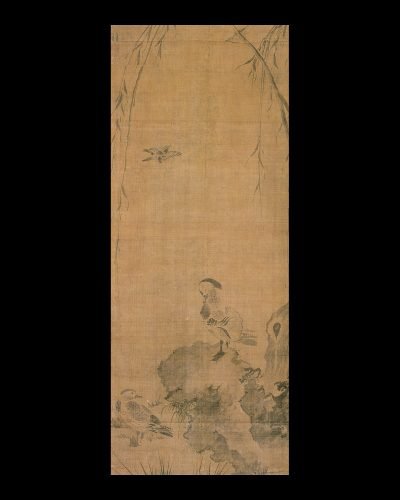 Inscription: “Wenxian painted this for Yidao.”

Ding Wenxian was born in Ruijin, Jiangxi province. He was famed for his skill in ink performances as well as for landscape painting and bird-and-flower compositions. According to the critics, all of these were highly accomplished and held to be the epitome of refinement. Unfortunately, the only other work known today that also bears seals of the artist is a short handscroll depicting “Autumn Tree with a Pair of Sparrows” (fig.1). This painting, in close stylistic accord with the present painting, was produced around 1446 for Zheng Jun and was found in the tomb of Wang Zhen, who died in 1496, supporting the supposition that Ding was active during the first half of the 15th century as indicated by the order in which he was placed in the early 16th century Tuhui baojian.