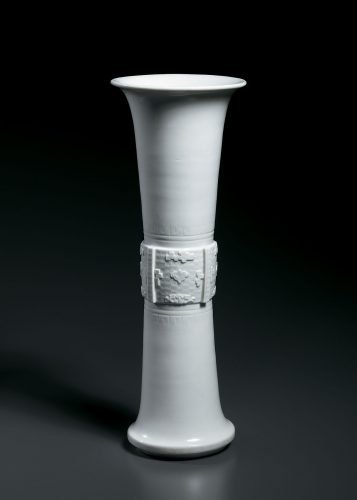 This handsome vase, based on an archaic bronze shape, is supported and raised on a ring foot below the flared and thickened rim of the trumpet-shaped base and ascends to a similar trumpet neck but with a delicate everted mouth rim. The midsection or waist is in the form of a wide raised belt with four sharply molded vertical flanges each decorated with squared key-fret or leiwen bands in intaglio. The flanges frame quadrants, each quadrant containing a small stylized taotie mask at the center surrounded by four highly abstracted zoomorphs, three detailed with leiwen, the fourth left plain, all against a leiwen ground. Double bowstring bands circle the vessel above and below the waistband while finely molded upright and descending pointed blades form narrow bands directly above on the neck and below on the tall foot section The white porcelain is covered with a milky white glaze which extends into the interior of the neck. The deeply recessed base and inner foot are glazed; the foot rim is unglazed.

A good number of white vessels similar to the beaker form here are known from the Qing dynasty (A.D. 1644-1911). Many are undecorated and most published examples are of much smaller size than the present monument al vessel. A perfect mate for this piece, however, in size and in almost every detail, does exist in the collection of the Tokyo National Museum (fig 1). It is possible that the dealer Yamanaka, a former owner of the present vessel, originally had both, the two forming a handsome pair that would have found a place in a prosperous Chinese household or temple or, if they had been exported to the West, in some ver y prominent home.1 The present vessel, however, was in Japan at least since the beginning of the twentieth century according to an inscription that was written on the interior of the vase’s wooden box’s lid that reads, “On an autumn day of the jia-chen year of the Meiji era (1904), appreciated and titled by an old man of seventy-four years, Kokoku.”2

The distinctive form of this vase mimics an ancient bronze gu drinking vessel and the decor also echoes that of the ancient bronze, albeit a distant and faint echo (fig. 2). Taotie (monster) masks, flanked by small dragon forms on leiwen or keyfret grounds, raised flanges, as well as ascendant and descendent blades on either neck or base were typical of the early bronzes. Although based on the gu, and to some degree on its close relative the zun, a stockier Bronze Age drinking vessel, the proportions of the white porcelain vessels that mimic them as well as the degree of flare at the mouth or foot varied greatly. The creators of these milky white wares—in Dehuaxian in Fujian province—did not necessarily have the ancient model in mind once its basic form had been absorbed into the repertory of the potters of the Qing period when the kilns, already in operation during the Song dynasty (A.D. 960-1279), experienced their greatest prosperity. If the present vase had been exported to the West, the most important market for the wares, it would have been christened there with the name blanc-de-chine. Just like the term “celadon” adopted by the French for the Chinese green-glazed stonewares reaching them during the 17th century, their term blanc-de-chine, “white of China” hit the mark and is still in use today.3

1. Yamanak a & Company, established in the late 19th century, were perhaps the most important dealers of Japanese and Chinese art for many decades. Chinese art became their specialty when strictures in Japan were placed on the export of Japanese art. With branches in New York, Boston, Miami, London, Beijing, and Paris, Yamanaka and Company can take the credit for having introduced many fine works to the West and even to collectors in China. For more on Yamanaka, see Thomas Lawton, “Yamanaka Sadajiro¯: Advocate for Asian Art,” Orientations, January 1995, pp. 80-93. The painting in catalogue no. 2 here was also in Yamanaka’s collection and a history of the Yamanaka Company treated in detail there.

2. Hiroshi Kawasaki, who transcribed and translated the inscription, suggests it was written by the Nanga painter Murata Kokoku who was born in 1831.

3. It should also be noted that an inscription on the exterior of the vessel’s box reads: “Jian ware white porcelain zun-form f lower vase.” The bronze beaker zun is similar to a gu and the terms were used interchangeably to describe the late versions of the vessels. Jian, known most popularly as the site of kilns producing black-glazed tea bowls in Fujian province during the Song and Yuan dynasties, refers also to the province itself, a shorthand version of the name using only the second character of its proper name.