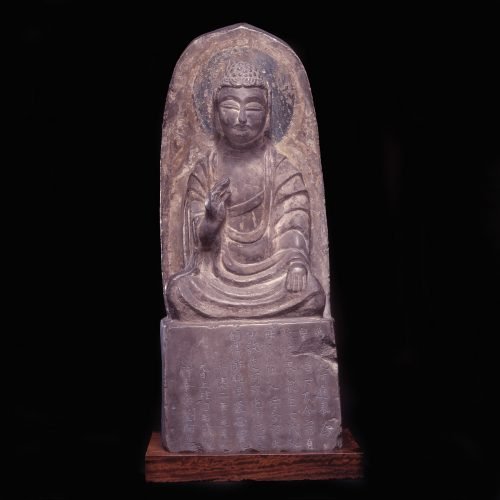 with Image of Amitabha Buddha

The dark-grey limestone stele consists of a seated figure sculpted in high relief against a bracket-shaped nimbus, the plinth below inscribed with a lengthy dedication and a date corresponding to A.D.665. The figure, identified in the inscription as Amituofo or Amitabha, is sitting with crossed legs in full frontal posture, the hands in variant forms of abhaya and varada mudra, the robes draping in concentric folds. The Buddha’s egg-shaped head is carved with smooth rounded cheeks, bow-shaped lips, high curving brows above heavily lidded eyes, and wavy hair beneath the snail-shell curls of the topknot.

Any Buddhist sculpture that is dated is potentially a valuable contribution to our understanding of the chronological development of style. The present figure exhibits certain unconventional features—for example, atypical mudra and an unusual coiffure—exhibiting anomalies, then, that we can understand as characteristic of an early Tang period sculptural style. At the same time the inscription makes mention of the Kingdom of Gui (within what is now Guangxi province), which indicates the provenance of the sculpture and, importantly, an early Tang regional style centered in the southwest.

The inscription reads: “The disciple Liu Ajin submits on behalf of the Emperor, officials, with responsibility for all sentient beings, all living creatures of the universe, seven generations of the families of his father and mother, and the adults and children of his own family, this image of Amitabha he reverently had made, wishing to achieve release (from rebirth) and to ascend to true enlightenment. On the twenty-ninth day of the fifth lunar month of the second year of the linde reign (July 17, 665), bestowed by Liu Ajin, who was promoted to zhaowu xiaowei (honorary fourth class military rank of colonel) of the Kingdom of Gui and had this made in obedience to the Vehicle (of Buddhism).”