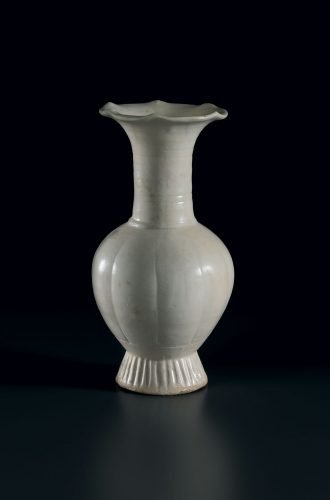 The elegant vase has a gently lobed ovoid body, a high cylindrical neck rising to an undulating hexafoil rim and is supported on a high foot with knife-cut fluting. The pale gray body was coated with white slip before the heavy application of a clear glaze marked with a very fine crackle. The glaze stops in an irregular line deep on the inside of the neck while a dollop of glaze was wiped on the deeply recessed base.

The present vase was produced during the 12th century at a kiln that was heavily influenced by the then-current fashion for the gracious white wares of Dingzhou in Hebei province. Ding ware had reached a peak of great elegance during the Northern Song period and had won imperial favor, a distinction that had made the style most fashionable and desirable, encouraging a migration of the style into neighboring provinces. Potters working in these regions without easy access to fine white clays used the mineral rich local materials inventively and to great advantage. They quite simply masked the darker bodies with a coating of white slip, produced presumably by small quantities of white imported clays, applying a clear colorless glaze before firing to achieve the basic Ding “look.” While not as technically refined as Ding wares, such monochromatic white Cizhou wares have a warmth and attractiveness that has made them particularly beloved in Japan where the present vessel was acquired, and where fine examples of similar form still exist, for example, in the Umezawa Memorial Gallery in Tokyo (fig. 1), the Victoria and Albert Museum in London (fig. 2) and the Asian Art Museum of San Francisco (fig. 3). 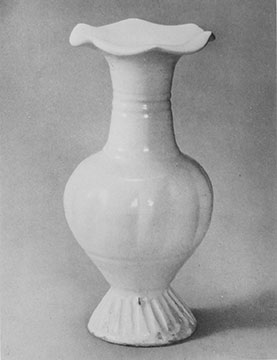 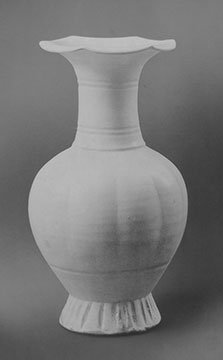 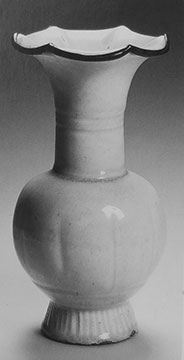