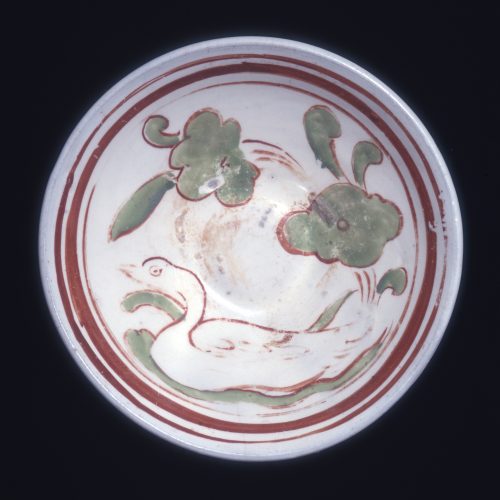 The shallow bowl is potted with gently rounded sides and trimmed with a low footring surrounding the slightly recessed base. The stoneware body is slightly coarse in texture and grayish-buff in color. A creamy white slip covers the interior and much of the outer wall and is protected by a clear colorless glaze that is smooth in texture and relatively bright. A large goose, drawn with flowing strokes of red pigment, is swimming through water indicated by undulating lines of green pigment. Large blossoms outlined in red with green interiors, surrounded by plump leaves produced through further strokes of green, float above while the entire scene is framed by reddish-orange lines circling beneath the rounded lip rim.

Slip-coating itself likely originated through a desire to produce the appearance of a fine white-bodied ceramic using the darker and coarser clays in abundant supply throughout northern China where this mode of production flourished. The white surface of slip-covered ceramics, however, provided an inviting surface for painted designs and scenes, colorful and lively décor that would have wide domestic appeal. Small dishes appeared to provide the greatest impetus for ceramic artisans who found it possible to successfully mimic popular painting subjects, and thus a migration from the world of the painter to that of the ceramic decorator occurred. The predominantly nature-based subjects were produced with a kind of ease and spontaneity that resulted in an absence of standardization and, compared to later overglaze-enamel decorated porcelains done in assembly-line fashion, a sense of improvisation and individuality reigned supreme in these wares.