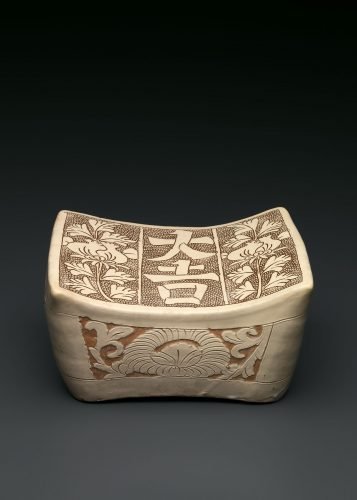 This finely crafted pillow is of rectangular form with a slanted slightly concave headrest. The headrest and sides were fully coated in an off-white slip to provide a ground for the finely incised, strongly carved, and ring-punched designs. The composition is centered on two characters, da ji, “great luck,” incised in the central panel of the headrest, the central panel flanked by narrower panels containing leafy upright peony stems with half opened blossoms and issuing further leaves, all standing out clearly and crisply against the carefully executed ring-punched ground. The front and back of the pillow are decorated with conforming panels enclosing chrysanthemum on scrolling vines with trefoil leaves in each corner and large camellia-like blossoms with trefoil and oval leaves on the sides, the bold designs standing out in white slip against the caramel-colored stoneware background where the slip covering was carved away. Covered with a clear colorless glaze that protects the white slip and design and adds a soft glow overall, the pillow is made of superior stoneware clay that is fine grained and that fired a pinkish- buff color visible on the unglazed base. A circular aperture piercing the body through the back of the pillow allowed for gasses to escape during firing.

The creatively conceived decoration, in which a number of techniques were skillfully combined, are held in common with other pillows datable to the 11th century A.D. in the Northern Song period (A.D. 960-1127). The star in this constellation is a pillow in the British Museum (fig. 1). According to the inscription in the panels flanking the four-character central design, the pillow was a produced by the Zhao family in A.D. 1071.1

The characters decorating the headrests of this distinguished group of pillows are auspicious. The present pillow conveys wishes of good fortune for the owner or household. The British Museum pillow reads jia guo yong’an, “home and country, everlasting peace,” while one in a private collection in Berlin reads fu de, “good fortune [and] virtue” (fig. 2).2 Characteristically a flat, stark, floral and leaf pattern produced in bold sgraffiato carving dominates the symmetrically composed designs on the four sides of the pillows. A bean-shaped pillow illustrated here was worked with the same three decorative techniques as the pillows above and yet the subject is entirely floral (fig. 3), while some pillows are decorated overall with characters and composition basically similar to the present but the motifs all incised rather than carved and all against ring-punched grounds, as in the case of a pillow decorated with characters reading chai shou, “purity [and] longevity” (fig. 4). Likely places of production were in Dengfengxian and Mixian in Henan, both kilns in the Cizhou sphere and flourishing during the Northern Song period, while Guantai in the heart of Cizhou production in southern Hebei province has yielded, among other relevant material, damaged leaf-shaped pillows decorated with auspicious characters in sgraffiato technique against ring-punched grounds (figs. 5-6).3

That Cizhou wares were not commissioned by the imperial household, that they were not “imperial” wares, turned out to be their blessing. The codes of excellence and standards of acceptability for imperial wares which resulted in ceramic products that were made by rote and should be predict able—no surprises—did not obtain in the world of Cizhou wares. And yet the wares could be, and often were, artistically superior. Furthermore, a door was opened to more adventuresome worlds. These worlds were landscaped by aesthetics and by commerce. From a commercial standpoint, Cizhou wares, by being made almost exclusively for the domestic market, escape the derogatory implications of being an “export” ware. From an aesthetic standpoint, Cizhou wares exhibit spontaneity, even individuality, and this makes them exciting, promising.

Anonymous craftsmen made the great majority of Chinese ceramics. Cizhou wares, however, more than any other wares before the 17th century—aside from a group of Jingdezhen wares of the Song period (see cat. 48)—bear the names of individuals, families or workshops. Such “signatures” served as advertisement as well as a source of “ownership” and pride. The British Museum pillow is an example of this, along with a good number of pillows especially by the Zhang, Wang, and Zhao families. And, we are sometimes able to see the hand of the potter in these wares, in a fingernail mark near the foot of a bottle, in a fingerprint caught in a transparent glaze, in the calligraphic flourish of a painted image or in a line of poetry, all embodying an ancient energy and gift. And when we look at these pillows, we are immediately alerted to an alternate reality, that Cizhou wares should not be categorically described as “common,” “plebian,” or “folk.” The imaginative concept, complexity of design and superior craftsmanship manifested in these wares, whoever the audience or client, have left us with objects that are stunning, chic, and classy.

1. For a translation of the British Museum pillow inscription see Yutaka Mino, Freedom of Clay and Brush through Seven Centuries in Northern China: Tz’u-chou Type Wares, 960-1600 A.D. , Indianapolis, 1980, p. 70: “’…..[first part indecipherable] pillow of the Chao family, permanently recorded,’ on the right and, ‘The fourth year of Hsi-ning [1071 A.D.], the third month of the nineteenth day,’ on the left.”

2. The background design is referred to as either “fish-roe” stamped or “ring-punched,” the latter more clearly indicating the metalwork inspiration for the early Cizhou decorative convention.