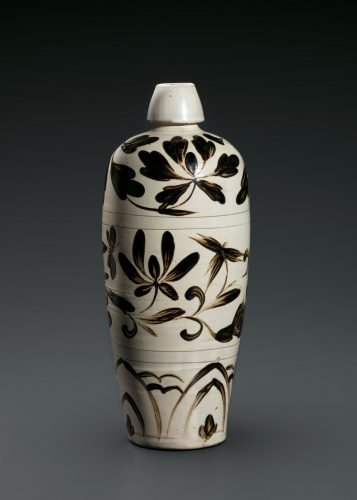 The statuesque meiping form rises from a wide base to a gently rounded shoulder below a rather tall and boldly formed conical mouth. The elongated bottle, roughly columnar in shape, provides ample space for a design divided into three distinct registers. The design is floral in nature and painted in a deep brown-colored slip over an evenly applied white slip. The central primary zone is cordoned off with double incised borders that frame calligraphically rendered lotus blossoms, seen from three viewpoints: depicted upright, from below and arching over, all on scrolling stems swiftly moving around the midsection. Two butterflies, with antennae nearly blending in with the flowers, swoop towards a bold upright blossom. On the shoulder are two peonies painted in much thicker slip in slight relief. Around the foot the upright petal band is freely painted in a thinner pigment while the motifs in the lotus and peony bands exhibit a pronounced “flying white” quality, caused when the pigment laden brush hairs separated during the painting process, allowing the ground beneath to show through and giving the impression that the painting was executed with great swiftness. The exterior is covered with a thin layer of clear glaze. There is some evidence of the glaze and the raw slip on the slightly recessed base of the hard grey stoneware.

The meiping is uncharacteristically decorated with two types of blossom, peonies around the shoulder with their characteristic frilled/lobate leaves and lotus f lowers within the main body zone, with the trefoil leaf typically depicted with this sacred f lower by Chinese artists and decorators. The lotus theme is revisited in the decoration below where its upright petals, painted in an unusually broad manner, form a band around the base, a lotus-petal throne supporting the vessel.

Dividing the vessel surface into horizontal zones was one effective solution for decorating this elongated form. The present floral shoulder scroll and bold cursory upright blades round the foot relate to a number of meiping including vessels of similar proportion and sporting conical mouths, two here with fine sgraffiato designs in their primary body zones (figs. 1-2). The composition on the present vessel is, however, relatively light and airy, unusual for vessels of Jin date (A.D. 115-1234). Spreading the motifs—blossoms, leaves, butterflies—in a loose design provides breathing space and a grace to a number of handsome vessels whether the motifs are standard, such as the lotus on a meiping in Kikisui Craft Museum in Japan (fig.3), or unusual, such as the engaging blossoms on a meiping excavated near Xi’an in Shaanxi province (fig. 4).

These vessels also exhibit the effect known in the world of Chinese painting as feibai, “flying white.” The bundled hairs of a heavily laden brush can separate when swiftly applied to paper or silk exposing areas of the white material below as the brush f lies by. The speed of the brush captured in such flashes of white is perfectly demonstrated in the ceramic vessels that easily communicate the ease and confidence with which the ceramic decorator wielded his brush.

The high conical mouth is a variant that is normally seen on Cizhou meiping ascribed to the Jin period, in contrast to the early everted or cupped mouths. Also commonly attributed to the Jin era is the particular shape of the vessel here with broad rather than narrow foot and a modified columnar rather than swelling or egg- shaped body on the one hand, or narrow body rising to high swelling shoulders on the other. From Hebei to Henan, Shanxi and elsewhere, numerous kilns produced the popular painted stoneware shape.

The history of the meiping in Chinese ceramics is a long one, beginning as the Tang came to an end in the early 10th century and persisting to the present day. While of ten called vases, meiping likely originated as bottles for beverages that would be decanted into ewers for serving. In a previous Kaikodo Journal, it was noted that “the name meiping, which means prunus or plum bottle or vase, has led to the notion that these vessels were for the display of flowers, and indeed in Ming and Qing dynasty painting the meiping shape with narrow neck and everted lip usually appears as a f lower vase. It is not impossible, however, that these well crafted and handsomely decorated bottles were intended quite specifically to hold a special brew, such as the plum wine which was a specialty of the north, where these very bottles were produced. When the meiping is seen in paintings of the Liao, Northern Song, Jin and Yuan, it is invariably a wine vessel and is often complete with cover…and usually placed on the ground, in a stand support, or on a sideboard.”1

One can imagine a row of sedately or flamboyantly, carefully or quixotically decorated meiping placed on a banquet room floor or garden ground, perhaps under a table where we see them in paintings from the Song period onward, and if gaily decorated as the meiping here, a most suitable way to usher out winter and welcome the spring.