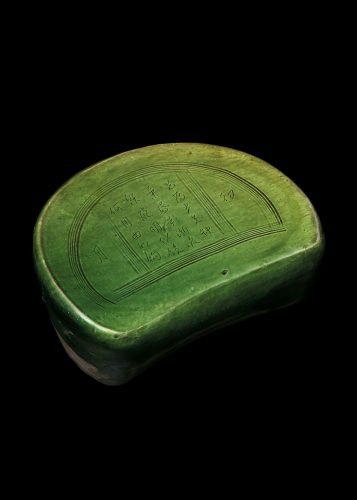 The bean-shaped pillow has gently curved sides, a slightly concave headrest tilting forward, and a flat base, all but the base covered with a white slip through which the decoration was produced using the sgraffiato technique before the application of the green glaze. The tripartite panel on the headrest, with outline combed in conformation with the pillow’s shape and further combed bands dividing the panels, contains a four-line poem, five character to a line, in the central section flanked by the character qu, “early,” incised to the right and yue, “moon,” to the left in the side panels. The decoration is restrained and purely literary. The pillow is covered with a minutely crackled, deep green glaze which extends over the sides, the glaze falling irregularly toward the base above the white slip that partially covers the base, the exposed body an orangey- tan color. The decoration stands out clearly, the characters appearing almost black where the glaze has pooled to fill the incisions that penetrate the white slip to the darker body below. A small aperture on the reverse contributed to the successful firing of the hollow headrest. The poem, Early Moon, reads: “Evading the whole, the rays are first broken; taking advantage of the dusk, shadows suddenly flow; and then they are able to shine like a mirror; of what use is the sickle-shaped moon?”

The written word played an important role in ceramic pillow decoration in China. Excavations particularly at kilns producing Cizhou type wares in Hebei, Henan and Shaanxi indicate a varied production spanning at least four centuries. Painting and incising were the primary methods of creating these carved in stone, so to speak, literary images. The present pillow and its close companions occupy a place within this history, one distinguished by great simplicity and restraint, and the exclusivity of the design, restricted for the most part—aside from a floral flourish now and again—to the words of poets and littérateurs that were deemed sufficient to conjure a feeling, a thought, a political stance, or simply a “picture” from nature.

A pillow excavated at a site in Hebei bears a similar poem with five characters to a line arranged in four lines (fig. 1) as does another from the same province—in its southernmost reaches the heart and homeland of Cizhou ware production—with a slight scattering of incised leaves outside the panel (fig. 2). The similarity of these pillows physically and decoratively suggests a common place of manufacture, perhaps at the Guantai kiln, and attribution to the Jin period is suggested by a pillow stylistically similar, with a floral rather than calligraphic design, in the Tokyo National Museum with a date corresponding to A.D. 1156 written in black ink on the base (fig. 3).

Well-known examples in public collections include one with a couplet conjuring an enchanting vision of birds and butterflies in the Fogg Collection in the Harvard University Museums (fig. 4), and another in the Idemitsu Museum of Art collection with its lengthy inscription both historical and poetic in nature (fig. 5). During the Yuan dynasty (A.D. 1279-1368), a range of literary compositions—poetic, journalistic, historical—sometimes cloak philosophical or political orientations. This messaging could well have begun during the Jin period (A.D. 1115-1234) when the Song court (A.D. 960-1279) and its supporters were driven south by its foreign conquerors. The poem on the present pillow, for example, appears in the Qing dynasty Quan Tangshi, “Complete Compilation of Tang Poetry,” compiled in the early 18th century. The poem is reproduced under the name of the poet Luo Binwang (c. A.D. 640-684) but also noted there as attributed to Shen Quanqi (c. A.D. 650-729). Shen was not only a famous and important poet of the early Tang dynasty (A.D. 618-907) but one known to have suffered banishment to the far south when political intrigues conspired against him. And Luo was known for his outspoken and rebellious nature, often penning (or brushing) his displeasure with the powers that be, even with the notorious Empress Wu. The sentiments associated with these poet/officials would have made their words most appropriate for the Chinese during the Jin period with similar experiences or fates or similar dilemmas and choices, or at the very least kindred spirits.1

How then did these poems, ballads, narrative tales, and historical accounts, in addition to simpler messages meant to express an emotion or to stimulate good dreams, become available to the decorators at the kilns? It is possible, especially during the Yuan period when pillows bear inscriptions in various highly accomplished calligraphic styles, that the calligraphy was executed by some literatus of the day rather than by a kiln craftsman. But it is also hard to imagine the incised inscriptions on the earlier pillows being done by someone with no knowledge or experience in writing calligraphy. However, the mistakes sometimes occurring in inscriptions and others done in slapdash or unsophisticated styles, point to this likelihood as well. Even, however, if uneducated kiln decorators were responsible for executing designs on some if not all occasions, someone selected the literary passages for copying. Perhaps a kiln owner who knew his clientele well? Perhaps on special order from a client who knew exactly what he or she wanted? Again, the realm of Cizhou ware pottery is hardly a commonplace one.

1. Song Boyin noted some years ago in an essay prepared for a catalogue on a major pillow collection, “As far back as the Northern Song Dynasty, pillow potters had begun writing inscriptions and painting pictures on the pillows they produced…They wrote down popular folklore and ballads, famous lines from classical poems, or expressed the aspirations of the people or particular moods…A survey of literature shows that the earliest textual reference to poetic inscriptions on pillow is in the Juyi lu by Wang Shizhen of the Ming Dynasty. Inscriptions on pillows may be as short as one or two characters or as long as over a hundred characters. The longest inscriptions we have seen so far is the 258-character ‘pillow poem’ inscribed in 18 lines on a Song brick-shaped pillow with black painted designs on a white slip coating and bearing the mark ‘Zhang Bing Yi Ren Zhi’ (Made by the Hermit of Zhangbing.)…It is of great historical value as it is the only pillow which actually tells of the history of pillows….” See Chinese Ceramic Pillows: the Mr. & Mrs. Yeung Wing Tak Gift (to the Museum of the Western Han tomb of the Nanyue king, Guangzhou), Hong Kong, 1993, p. 452.