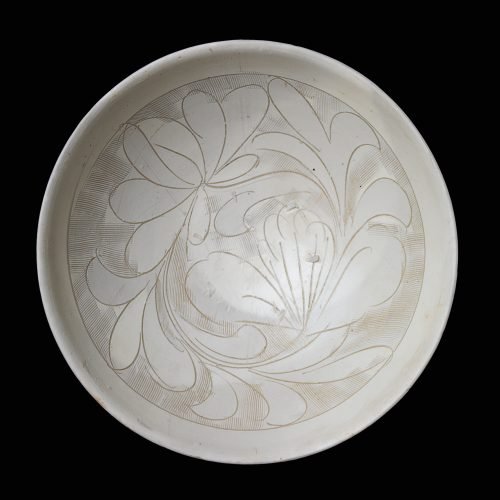 The large bowl has gently rounded sides rising from a thick square-cut foot to a very slightly everted rim. The decoration was incised and combed through the cream-colored slip with lotus bloom in profile, a large lotus leaf, and frond-like leaves of a water plant. The décor is confined within an area bordered by an incised line circling the interior of the bowl below the rim. Five small unobtrusive spur marks visible on the interior are evidence that another piece was supported within the bowl during firing. The slip coating on the exterior ends well above the unglazed foot and base where the oxidized surface of the grey stoneware body exhibits a buff color.

The use of white slip on the darker stoneware bodies produced from the local clays of the Cizhou area was an attempt to replicate the appearance of the fine white Ding ware bodies fashionable especially during the Northern Song period. It is therefore not surprising that motifs, such as the particular form of the lotus, would have also been borrowed by the Cizhou potters

A good number of examples of the Cizhou ware are known from public collections, including a handsome bowl from the Palace Museum in Beijing.1 Closely related products from such Cizhou kiln centers as Hebiji in Henan and at Guantai in southern Hebei province suggest the primary areas where these wares, including the present, were created.2

2. A large shard from a bowl decorated with incised and combed lotus design excavated at the Hebiji kiln, Tangyinxian, Henan province was illustrated by Yutaka Mino in Freedom of Clay and Brush through Seven Centuries in Northern China: Tz’u-chou Type Wares, 960-1600 A.D., Indianapolis, 1980, fig. 78, p. 91, and another excavated at the Guantai kiln in Hebei province, datable to the Jin dynasty in the 12th century, is illustrated in Guantai Cizhou yaozhi, Beijing, 1997, pl. XII:1.