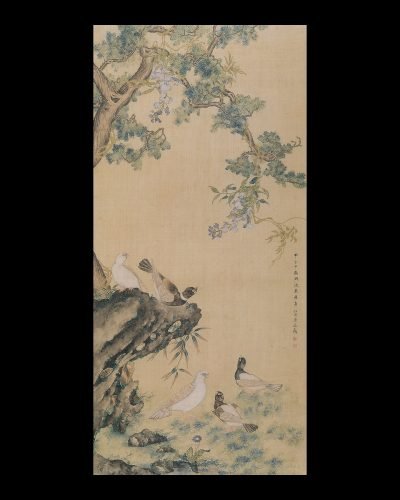 Five pigeons appear in the foreground, three among grasses and two perched on a garden rock, a gnarled cypress and vines rising above them. In Chinese society the pigeon symbolizes fidelity and longevity, probably because the birds mate for life and both sexes take a share in raising their young. The bird is also a favorite among urban dwellers, who often raise them in cages on the roofs of their houses, to which heights their master would often repair to be soothed by the soft cooing of the birds.

Chu Zhaolin is not recorded in standard biographical sources but he is known to have been a court painter active probably during the second and third quarters of the 19th century and like court artists of all times and places, Chu had highly-developed technical skills, as evident in the painting here, and used them in the creation of images designed to meet the needs and desires of their rulers. Chu’s “Flower” album done after the Italian missionary Guiseppe Castiglione (Lang Shining) (1688-1766) in the Palace Museum in Taipei, his “Longevity like a Mountain, Wealth like the Sea” in the Palace Museum in Beijing, along with the striking “Eagle on a Cypress Tree” formerly in the Papp collection in Phoenix Arizona join the present in establishing Chu as a master to be admired.