Inscription:
“I painted a scene that is both lofty and eloquent,
indulging in fantasy to capture the sound of the mountains;
Seeking to give this to the man of the Sounding Mountains,
who comes at this time to see me and then returns.

During late winter of the year 1661, painted and playfully inscribed for his great pleasure by his disciple, Chu Ling of Ch’ang-chou.”

A boat poled by an oarsman with scholar as passenger approaches a shore on which appear several buildings nestled among trees at the base of mountains. According to the artist’s poem, the scene portrays a friend who lives in the mountains but each year at this time descends to visit with him. The brushwork here is quite lively in comparison to other of the artist’s works (fig. 1) and serves to evoke the sense of anticipation felt by the artist.

Chu Ling, tzu Wang-tzu, hao I-ch’iao, was born in Suchou, Kiangsu province. There has been some confusion about his proper name since he sometimes signed his name as “Chun” rather than “Ling.”[1] Chun ( 陖 ) is the more rare character, meaning “tall and precipitous,” while ling ( 陵 ) means “tall mound.” Although the denotations are related, it seems most likely that Chu Ling intended the chun to be understood as a simplified written form of ling. Chu is said to have followed Huang Kung-wang (1269-1354) in his brushwork, and his by-name of Wang-tzu seems also to have been derived from that of the Yuan master. When the young Huang was presented to the person who adopted him, he is recorded as having exclaimed: Huang-kung wang tzu chiu ( 黃公望子久 ), meaning “Master Huang has been hoping for a son for a long time.” The first part of the expression supplied the name of the boy, Huang Kung-wang, and the second part his tzu, which was Tzu-chiu. Chu Ling thus followed the middle portion of this formulation and took Wang-tzu as his own tzu.

Chu Ling’s birth and death-dates are not recorded but he is said to have been a close friend of Wan Shou-ch’i (1603-1652), in which case he must have been born no later than about 1635 or so. Extant paintings range in date from about 1659 to 1680, suggesting that he was not included in the major biographical compilations of the later 17th century because he was a bit too young to have been well-known to those who wrote such texts. A number of extant paintings give some indication of his various associations. For example, a handscroll now in the Shanghai museum was painted, in sequence, by Yang Pu, Yuan Shang-t’ung, Ling Pi-cheng, Yuan Hsueh, Ch’i n I, Shen Fei , Shao Mi, Wang Chun, Shih Hsuan, Ch’ien Ch’uan, Liu Ch’i, Sung Chih-lin, Shih Han, and Chu Ling; the section by Ch’ien Ch’uan is dated to 1659, suggesting that Chu’s portion was complete not too long after.[2] A majority of the named artists were from Suchou, either contemporaries of Chu or his immediate predecessors. Another joint work was an album of landscape paintings by Wang Chien (1661), Shen Tsai (1678), Chu Ling, Chu Po, Wen Tien (1684), Chin K’an (1678), Lao-cheng (1681), Ku Yin, Ku Ch’iao (1690), and Chou Yueh-feng (1690).[3] Suchou artists are again prominent but there are also those from the areas of Hua-t’ing and Lou-tung as well, including Wang Chien and a number of associates of Wang Hui. In a third example, an album of twenty leaves, the twelve contributing artists were Wang Hui, Wang Chien, Wang Wu, Chin Chun-ming, Wen Lan (1679), Ku Yin, Kao Chien, Chuang Chiung- sheng, Chu Ling, Wen Chih, Chu Po (1679), and Sung I (1679).[4]

The basic pictorial matter of Chu’s paintings was drawn fairly directly from the style of Huang Kung-wang, seen, for example, in the latter’s “Rivers and Hills Before Rain” (fig. 2). Chu’s sloping hills are shaped with more precision and regularity but their articulation by means of dottings, the placement of architecture, and the rhythmic procession of trees is seen as well in other works by Chu (fig. 3). 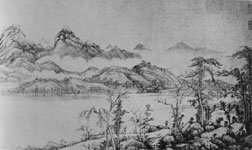