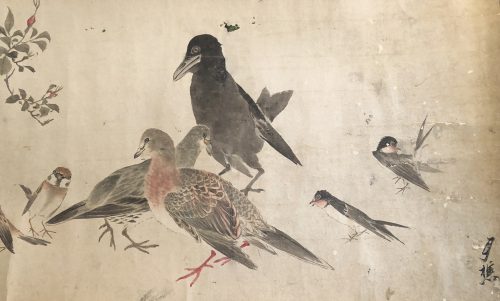 A plethora of birds of various species and in a range of sizes, orientations, and colors are arranged on a blank ground perched on flowering branches. Such a gathering is unlikely ever to have occurred in nature but allows the artist to demonstrate his knowledge about birds and to showcase his considerable talents in their representation.

Cho Gessho was born in Omi province, the son of a calligrapher and mounter of scroll paintings. In Kyoto he studied with Matsumura Goshun (1752-1811), who in turn was a pupil of Yosa Buson (1716-1784), a major master of the Nanga School in Kyoto. Gessho is also associated with the Maruyama school began by Maruyama Okyo (1733-1795), who emphasized a greater degree of naturalism, such as can be seen in the present handscroll. Gessho was quite well known for his figure and bird-and-flower compositions. Many of these appear in his illustrations designed for various printed books of the time. Appointed painter for the Tokugawa family, Gessho also worked on fulsome paintings for Nagoya Castle.