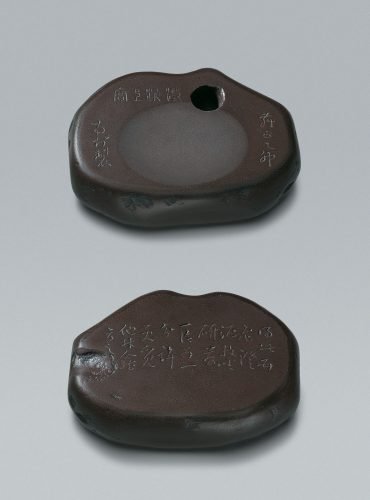 Chengni refers to a refined product that resulted from a complex method of filtering, purifying, modeling and firing clay. During the Qing era a rather eccentric approach to creating inkstones from this material, along with the natural stones normally used, resulted in what we might call “free form” stones, with ink wells that are quite small and even obscure. They appear “natural” rather than “worked,” the edges relaxed and amorphous. This approach went hand in hand with calligraphic inscriptions that provided the sole decoration on the smooth, sleek surfaces as well as data and food for thought. These otherwise clear surfaces, with few decorative intrusions, provided canvasses for such artists as Gao Fenghan (1683-1749), the creator of the present inkstone and it

Gao was celebrated as a painter and calligraphy as well as a producer and avid collector of seals and inkstones. Gao built his impressive collections during a period of governmental service in Shexian, Anhui province, a place justly famed for its production of both ink and inkstones. He created great numbers of inkstones himself utilizing a range of materials. According to Dorothy Ko’s engaging study, The Social Life of Inkstones: Artisans and Scholars in Early Qing China 1(Seattle and London, 2017), “… he bought cheap stones or picked them up off the streets; he chiseled them into awkward shapes; he etched the encomiums in oddly sized script on impulse…. Then he sold or gave the inkstones away.” (p. 196). Lacking funds to purchase Duan stones might have led to Gao’s preference for the “the cheaper baked sieved-clay [chengni] blocks bought wholesale from vendors from Tongzhou” (p. 197).

The present chengni implement is a handsome example of a “free form” inkstone by this great artist/craftsman of the early Qing. It bears inscriptions and is accompanied by documents translated in full below. They include

[1] Gao Fenghan’s inscription on the upper surface; [2] a colophon on the reverse by Lin Kanfang, an important Taiwanese collector living in Tokyo during the second quarter of the 20th century, authenticating the stone; [3] a box inscription conveying Gao’s passion for inkstones and seals; and [4] a letter accompanying the box written for Lin by Inuki Tsuyoshi (b. 1855, Prime Minister of Japan), who deems the stone outstanding, and “no doubt created by Gao Nancun (Gao Fenghan).” [1] Inscription:
“A chengni (‘refined clay’) superior treasure (inkstone) from the year 1735 during the Yongzheng reign-era, made by Nancun (Gao Fenghan).” [2] Colophon on reverse:
“I have collected five chengni slabs, investigated and recorded one of them; this one can be considered fine, and I will look out for others. Authenticated by Lin Kanfang.” [3] Box inscription:
“This was made by Gao Nancun (Gao Fenghan). Nancun had a passion for inkstones, and personally wrote the Yanzhuo fa, ‘Methods for Cutting Ink-stones,’ so as to make manifest his creative spirit. Nancun’s surname was Gao, his given name was Fenghan, his by-name was Xiyuan, and he was called Nancun and Nanfu laoren. Loving inkstones, he collected more than a thousand, all of which had his personal inscriptions, and he wrote the Yanshi ‘History of Inkstones.’ When his right hand became unresponsive, he used his left hand for calligraphy and painting, calling himself Shangzuosheng, ‘Student who proceeds with the left.’ During the fifth lunar month of the year 1935 in the Showa reign-era, I inscribed this box for Master Lin.” [4] Accompanying letter:
“…An inkstone from Taiwan has been forwarded. I want to shave off its vulgar design of pine, bamboo and plum, and wish to somehow reconfigure it with a more suitable pond shape…On the other hand, the chengni (‘refined clay’) inkstone belonging to Mr. Lin is extremely outstanding. There is no doubt that this inkstone was created by Gao Nancun (Gao Fenghan). I also own an inkstone by him from the yimao year during the Yongzheng reign era (1735). Because I was born in the yimao year, just more than a century and some decades later, I am extremely desirous of possessing this inkstone. Kanzan Gakei (Inuki Tsuyoshi), called Bokuo, on the tenth day of the fifth lunar month.”
Back To Top