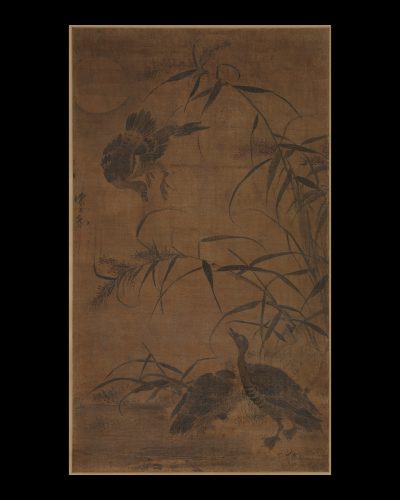 “Geese and Reeds in Moonlight”
芦雁圖

Box Inscription:
“After (Tokugawa) Keiki, the Chunagon from Hitotsubashi, stayed in the Goten Residence (in the Higashi Honganji), he sent greetings and offered this present. Written during the third lunar month of the year 1863 of the Bunkyo era (1861-63).”

In creating this dynamic image Chen Zihe first washed in much of the background with ink, leaving portions of the silk in reserve, which serves pictorially to suggest the fall of moonlight on the various forms. The composition is strongly diagonal, creating an arresting instability that is held in visual balance by placement of the head of the birds on or near the central vertical axis of the work and by the horizontally placed reed.

According to the Japanese box inscription, in 1863 the painting passed as a gift tome Tokugawa Keiki (1837-1913), the fifteenth and last Shogun of the Edo era, to the Higashi Honganji, the famous Kyoto temple whose hospitality earned them this gracious gift.

Born in Pucheng, Fujian province, Chen Zihe was strongly influenced by the style of Lin Liang (ca.1430-ca.1490). Notations on several of his paintings give his age at the time of execution; these range from the age of 71 until the age of 82, so he must have remained active well into the 16th century.