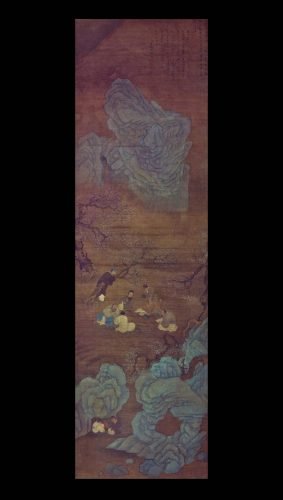 ‘Elegant Feast in the Peach and Pear Garden’ 1652

Inscription:
‘Two days after full moon of the eleventh lunar month of the year 1652, Chao Ch’eng, the Old Man of Snowy River, while in the meditation hall of Kan-lu Temple at the age of 71, followed Chao Meng-chien in this T’ao–hua Ya-yen T’u, ‘Elegant Feast in the Peach Garden.’’

(See write up below.)

Chao Ch’eng, tzu Hsueh-chiang (‘Snowy River’) and also Chan-chih, was born in Yingchou, the modern Fu-yang in Anhui province. According to Chou Liang-kung (1612-1672), Chao’s friend and earliest biographer, Chao travelled extensively in the north, living in various cities in Shantung and Honan provinces before returning to Hao-shang in Anhui. [See Chou Liang-kung’s long biography of Chao in Tu-hua Lu (Hua-shih Ts’ung-shu edition), chapter 3, pp. 2172-2074. For a complete translation see Hongnam Kim: Chou Liang-kung and his Tu-hua-Iu (Lives of Painters): Patron- critic and Painters in Seventeenth Century China, University Microfilms International, Ann Arbor, 1986, pp. 131-135.] Sung Wan (1614-1673) of Lai-yang in Shantung mentioned that Chao visited his father in 1637 and Sun Ch’eng-tse (1593-1675), who served in Peking during the 1640s and 50s, collected and published forty of Chao’s poems. Chao was also associated with Hou Fang-yu (1618-1655) and Hou Fang-hsia (chin-shih in 1646), brothers whose Hsueh-yuan ‘Snow Garden’ was an important cultural center in Honan during the mid-I7th century. [For a discussion of this important group see Hongnam Kim, op.cit., volume 2, p. 65 fn. 236.] The range of Chao’s relationships serves to confirm Chou Liang-kung’s statement that ‘Wherever (Chao) went, people competed in their praise of him.’

One of the most important influences on the development of Chao’s artistic style was Wang To (1592-1652), a calligrapher, painter, collector, and important official under both the Ming and Ch’ing dynasties. It was perhaps during the latter part of Wang’s career, during the late 1640s, that Chao was able to study the imperial collection of paintings through Wang’s intercession. According to Chou Liang-kung, ‘The master excelled in making copies. He regularly travelled to Ch’ang-an (Peking), where he associated with Wang Meng-chin (Wang To) and often viewed the old Inner Palace collection. All of these were reproduced in small scale, and there was not a single brushstroke that did not resemble (the original.)’ In his biography of Wang Hui (1632-1715), Chou again mentioned the skill with which Chao could replicate old styles: ‘(Wang Hui’s) copies of Sung and Yuan masters are exactly like them; people in Wu (Suchou) often buy his productions and mount them as fake (originals) with which to fool antiquarians. Even well-experienced connoisseurs do not recognize them as contemporary paintings. Among copiests of ancient (paintings) I have seen, there are only Chao Hsueh-chiang (Ch’eng) and Shih-ku (Wang Hui). Hsueh-chiang adheres too closely to established rules and thus lacks self-expression, while Shih-ku is gifted by nature and rich in youthful vigor, so he is able to keep abreast of the ancients when he paints …’

However, judged by standards other than the incomparable Wang Hui, Chao Ch’eng still produced very admirable works that were worthy of emulation. Chou Liang-kung recalled that ‘The master copied twenty old scrolls for me that I then gave to censor Wang I-an (Wang Ta-hsing). These were later obtained by the King of Liu-ch’iu, where they will forever be treasures of that land beyond the seas …’ Wang Ta-hsing served as envoy to the Ryukyu Islands during the mid-1650’s, and it was likely he who introduced Chao’s paintings to that foreign land. Chou also recorded an album of forty leaves by Chao with long inscriptions covering the remaining area written by Wang To as being ‘truly a special work. The master planned to give it to me, but after he died it was carried away by someone from Hao-liang, Even today I still think about it.’

Other accomplishments of Chao Ch’eng mentioned by Chou include poetry, calligraphy, portraiture, and singing, and he was also noted for ‘liking to don a red robe and walk through snow carrying a staff.’ During the autumn visit in 1637 to Sung Ying-heng (d.1643), Chao and Sung ‘sat that evening on the river bank. Ordering a servant to catch more than several tens of fireflies, he then placed them within his gauze hat. Looked at from afar, their lights gleamed like pearls and the flashing rays illumined the path, while Hsueh-chiang continued to chant as before; such was the lofty nature of his character.’ Chao’s approach to painting–if not necessarily his very engaging personality–was inherited by a son named Chao Shen and a grandson, Chao Chien.

The account of Chao Ch’eng’s life given above creates certain expectations about the nature of his art, very few of which are fulfilled by any extant painting. Despite the almost invariable written reference in his inscriptions to some great master of the past, Chao’s actual paintings seem based not on direct study of some specific earlier masterwork but rather appear to be conscious manipulations of past traditions in the production of archaistic paintings that refer generally to the past while being very much of their own time. In the present painting, for example, the inscription refers to Chao Meng-chien (1199-ca.1267), a Sung painter known today as a specialist in narcissi, plum blossoms, orchids, and bamboo rather than figure or landscape painting. And neither does the style of the painting relate to any known Sung style but seems instead to derive from literary accounts of pre-Sung figure-in-landscape compositions.

The artist’s inscription gives the title of his painting as ‘Elegant Gathering in the Peach Garden,’ and this is most likely the Peach and Pear Garden located in the capital city of Ch’ang-an during the Tang dynasty. During the mid-8th century Li Po (705-762) wrote a famous preface for the series of poems he and his friends composed while drinking in that garden one night. The main figures depicted here are thus probably to be identified as Li Po and the group of friends known the Yin-chung Pa-hsien, ‘The Eight Immortals of the Winecup.’ A contrasting vision of the same theme is that of Ch’iu Ying (d.1552), whose painting now in the Chion-in temple in Kyoto concentrates on a realistic portrayal of the urban setting for that evening gathering. Chao Ch’eng’s painting is far more expressionistic, with especially the landscape elements being transformed so as to suggest the otherworldly nature of the original experience. Li Po also lived for a time in the mountains as part of another group, one known as the Chu-hsi liu-i, ‘Six Eccentrics of Bamboo Stream,’ and the remote setting here may be intended to suggest that part of Li’s life as well.

A similar approach can be found in a painting done some years earlier, the ‘Entertaining a Guest in the Apricot Garden’ painted in 1638 by Ts’ui Tzu-chung (1594/5-1644). Chao Ch’eng may have known Ts’ui personally, and it is certain he was aware of Ts’ui’s art; one leaf of an album painted by Chao in 1654 is inscribed as having been modelled on Ts’ui’s version of a Sung composition. By that date Ts’ui had been dead for ten years, having starved himself to death rather than continue to live under the foreign Manchu regime, and Chao Ch’eng had left the north for the city of Chen-chiang, near Yangchou, where the present painting was done in the Sweet Dew Temple. Chao’s style of painting would seem to have been influential on that of the Yangchou artist Ku Fu-chen, who could have seen such late works as the present one by Chao. The subject of Chao’s painting was far removed from his own time and place, and the artist visually communicates the idea of spatial, temporal, and psychic distance by the archaizing, pseudo-naive style of the painting. The coloring and strong sense of patterning are close to those of the 13th-century master Ch’ien Hsuan, whose style was based in turn on those of Six Dynasties and Tang masters, so the viewing experience is enriched by art-historical as well as historical and literary allusions.