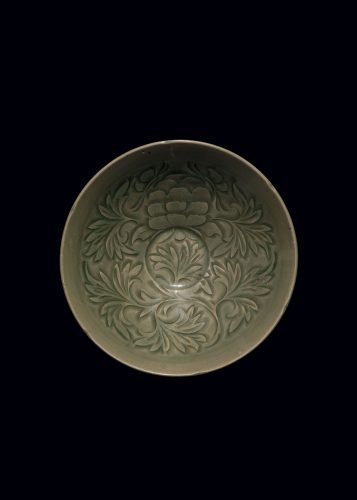 The bowl is shallow and potted with a wide-open interior and with six faint notches evenly spaced on the rim. Deeply carved, the decoration is a single peony stem issuing six further stems with luxuriant leaves fanning out to flank the blossom. The main stem extends from near the rim over the interior and issues a large “beehive” peony with rows of very fine-combed petals. The deft carving is done in such a way that the deep crevices outlining the leaves, stems and flower are filled with the pooled glaze producing a “colorful,” dynamic picture. The olive-green glaze, exhibiting great clarity and a brilliant reflective surface, covers the bowl inside and out. The exterior is more freely carved with a random petal design above the slightly splayed and squarecut foot with the dark grey stoneware visible on the unglazed foot.

One major stem, one blossom, a plethora of leaves. A simple and gracious solution to ceramic decoration. Beauty is born from materials, design and execution. Dark grey stoneware and glassy olive glaze, a single peony blossom surrounded by a leafy entourage, carved and combed with clarity, precision, nuance.

Of all the craftsmen working at kilns in Song-dynasty China, none were as proficient at producing carved decoration on ceramics than those at establishments in Yaozhou in Shaanxi province. A majority of the design on the present and related high-quality Yaozhou carved wares was formed by means of a sharp blade held at an angle allowing for the clay to be swiped away on a diagonal. The glaze pooled at the various depths producing, within a green to grey spectrum, a polychromatic effect. This method, utilized to spectacular effect as in the present bowl, is exemplified by another bowl with the same distinctive peony motif, a vessel designed without a well at the bottom and thus creating a continuous surface for the display of the peony (fig. 1).

This type of peony is referred to as “beehive-shaped” in Western literature and contrasts sharply with the popular representations of the luxuriant, soft, fluffy blossoms of the mudan (“tree peony”) illustrated in another well-carved Yaozhou bowl (fig. 2). On the present the marshalling of petals, tightly together in rows stacked one upon another in the “beehive” or pine-cone form, produces an image that is quite suggestive, actually, of a spectacular torch-ginger blossom. The leaves, however, are faultlessly peony, and although carefully arranged into a decorative surround for the blossoms, their complexity and dynamism convey a natural, luxuriant growth, a veritable unkempt thicket of green, reminding us that the peony was not always a tame garden flower but was born in the mountainous wilds, actually in Shaanxi province, the home province of the Yaozhou kilns.

The “beehive” peonies might be among those described by the great Northern Song scholar, historian, eminent official, and greatly reveredpoet Ouyang Xiu (A.D. 1007-1072). His treatise Luoyang mudan ji, written in 1034 during the Northern Song period, is devoted to the tree peony, flourishing close to his home in Henan province. The great scholar enumerated the varieties, addressed nomenclature and discussed the cultivation, history, legends, and the role of the peony in society. A number of species were described as growing with petals tucked under one another with the petals woven or knit densely around the center of the flower, descriptions which do capture the unusual character of our peonie here. The blossom lent itself perfectly to the deep relief carving of the Yaozhou potters, which only Cizhou decorators using their sgraffiato techniques, as on the pillow illustrated here, could rival (fig. 3).

Whereas Yangzhou in the southeast was the center of shaoyao (herbaceous peony) cultivation, Luoyang in Henan province was the center of propagation of the mudan, with the market for the flower and accessories, objects, paintings, and accoutrements related to the flower creating a booming business. The peony motif was most frequently produced at kilns in the north, and Luoyang would have been a great market for the wares from Yaozhou, as would have Kaifeng in Henan, the capital of the Song and home of scholars who also wore the hats of government officials and were the primary aficionados of the flower. 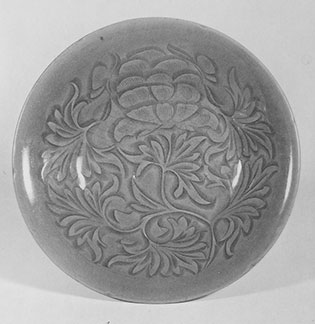 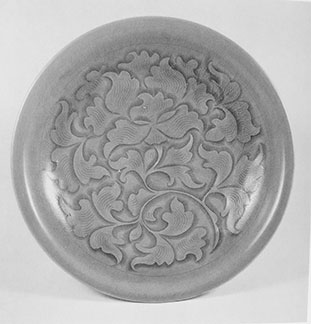 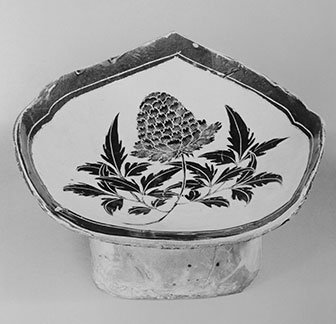