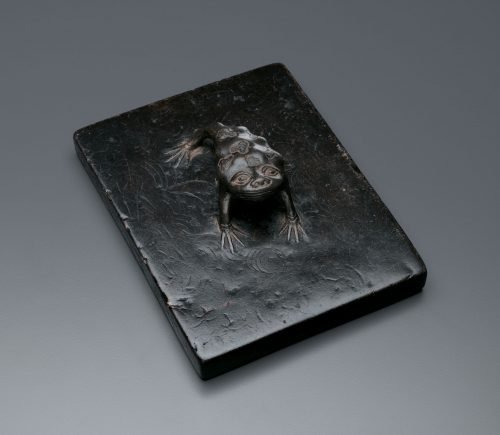 The rectangular slab was carved f lat and likely polished before the figure of the three-legged toad, carved in three-dimensions from the same stone as the slab, was applied directly in the center to form a sturdy handle. The surface of the creature was scratched to produce a skin with markings characterizing a toad and the amphibian completed with heavily lidded eyes and three legs terminating in long toes spread out onto the surface that is lightly carved with a string of cash between the front feet. A faintly incised wave pattern surrounds the creature. All four sides of the slab are carved with ‘cracked ice’ and floret patterns. The dark stone is a brownish-black color and polished, the underside is rougher and a paler tone.

The bizarre creature is actually a familiar sight in the landscape of Chinese fable. In one avatar, the three-legged toad resides in the moon, which at times he is prone to swallow, causing what we call a lunar eclipse. The present manifestation is an earthbound creature, but with magical powers no less. The flat dark ground provides a murky pond, the three-legged toad comfortable and most at home anchored to its center. Tempted out of hiding by golden coins dangled as bait by Liu Hai—there they are reflected in the pond here—the toad sometimes eluded the Daoist transcendent. Liu was therefore known to have always carried a string of cash in the event that the little critter went missing. On his best behaviour the three- legged creature was a companion of Liu Hai whose studies in alchemy had drawn him away from his life as a bureaucrat in 10th-century China into a world where he was rewarded with immortality along with the friendship of this magical toad who was able to provide swift transport to whatever was the Daoist’s chosen destination.

In popular lore Liu and his toad were harbingers of good fortune in the most basic sense of the term, that is, as magnets for wealth, as well as success in business and general prosperity. The weight here therefore would not only have served a function within a study or place of business, to keeps papers securely held down for the magistrate, or bills and invoices for the merchant, or papers for the teacher or student, but would have, in a perfect world, worked the magic it was intended to, raining wealth upon its lucky keeper.

Liu and the three-legged toad are well- represented in paintings and works of art in China and Japan, illustrated here by a detail from an overglaze-enamelled (ko-aka-e) dish (fig. 1), paintings of Liu with the toad on the interiors of two kosometsuke dishes (figs. 2-3), a bronze incense burner in the form of the Daoist transcendent on the back of his cohort (fig. 4), and lastly, a Japanese painting showing the immortal with a small toad in his hands and the three-legged toad clinging to his head (fig. 5). 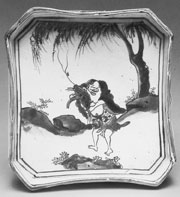 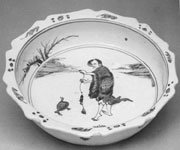 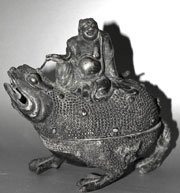 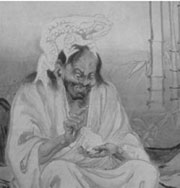