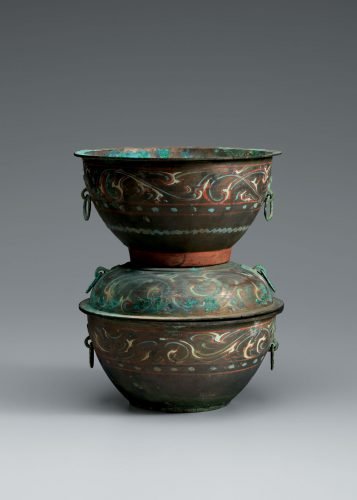 The thinly cast bronze steamer is complete in three parts: a bottom bowl with a ring foot and flat rim; a midsection bowl with closed rounded base and a flange circling its widest girth, rounded shoulders that appear like an inverted bowl, and a wide upright mouth; and the top bowl with flat mouth rim and a wide foot surrounding a base perforated to form a grate for the passage of steam. The three sections stack one on top of the other, the midsection flange fitting perfectly on the lower bowl’s mouth rim and the foot of the upper bowl fitting snugly into the mouth of the midsection bowl. Each of the three sections is set with a pair of low-relief cast taotie masks suspending loop handles. Reddish-orange, light green and turquoise colored pigments were painted on each of the three sections to create a fluid linear pattern suggesting images of wispy swirling vapors as well as conveying the energy of a calligrapher’s brush. The designs of the upper and lower bowls are similar with their cloud-like bands enclosed each by a single reddish-orange bowstring above and below by a pair of lines enclosing a row of large green dots, the lower bowl with an additional ruff led line border circling the vessel well above the orange-painted foot. While the area above the flange of the midsection bowl is painted with a similar design, the sweeping lines create larger arcs and the design is looser, more dissolved than the tighter organization on the upper and lower bowls where lines and arcs are intertwined. The metal is a coppery color with grey overtones and with green encrustations on the exterior of the midsection bowl, taotie masks and ring handles, and with patches of green on the interiors of the bowls.

Painted bronze vessels are a great rarity and appear to have been produced over a relatively short period of time during the Western Han dynasty, and likely in China’s northwestern provinces.1 They form a rather cohesive group, the vessels of rather small size, the coppery bronze usually in the form of thin-walled, light-weight vessels, and the painted designs either abstract like the present, which has a close counterpart in the Boston Museum of Fine Arts (fig. 1), or figural, consisting of large scale human or animal forms. While multi-part xian vessels do not appear to have survived intact in great number, individual sections have been collected in private and public collections.2

At the core of this group’s identity is brush and pigment. The brush made from animal hairs had become a powerful tool for artisans and artists in China at least from the late Zhou period onward. During this early period, lacquer wares stand out as having been a most extraordinarily receptive vehicle for the painter (fig. 2). By the Western Han dynasty, earthenware ceramics joined the fold (fig. 3), and at the same time, after the heyday of Chinese ritual bronzes was long past, bronzes also became vehicles for painted designs.

It is natural to suppose that the fluent linear designs that appeared on such painted lacquers, ceramics and bronzes of the Western Han period as seen in the examples presented here were influenced by the fluid linear patterns gleaming in gold and silver of late Zhou period inlaid bronzes (fig. 4).3 While lacquer was a luxury item for the royalty and the elite, the painted ceramics would have appealed to a wider audience and clientele. However, the presence of such ceramics along with extraordinary lacquer ware in the tombs of the nobility, such as the fanghu illustrated here, argues against the usual explanation that such painted ceramics were imitations of costlier materials exclusively for the less affluent. One is then left to wonder for whom the painted bronzes were intended.

The steamer originated in Neolithic period ceramic vessels and persisted as a highly functional bronze type throughout the Xia and Shang, continuing through the Western and Middle Zhou periods, and was revived in the Han period when both undecorated and painted xian were produced. During the greater history of the steamer, the upper section of the vessel, its base perforated to let the steam pass from the boiling water below, was supported on a tripod; the hollow legs were fashioned to ho d the water and support the vessel over a fire. These tripod-steamers, which were efficient cooking implements, are rarely seen during the later Zhou. With the ebbing importance of ceremonies requiring the preparation of ritual foods and offerings, the xian might have lost its viability as a ritual vessel. Other bronze vessels that originated as cooking vessels did survive, likely because they were both multifunctional and provided surfaces perfect for the lengthy inscriptions that had come into vogue. When the xian becomes popular again during the Western Han, the cookware consists of either two or three sections, the lowest in the form of a bowl with a ring foot. The steamer set could have been placed on a tripod over a fire or placed directly on a stove.4 The painted bronzes, however, would have served as mingqi, “spirit objects,” used only in the afterlife by the spirit attendants of the departed and heated in fires outside of our mundane realm.

2. For example, in the Asian Art Museum of San Francisco and in the Freer Gallery of Art in Washington D.C. (see Nelson, ibid., figs. 10, 12, and 13) and in the Indianapolis Museum of Art (see Yutaka Mino and James Robinson, Beauty and Tranquility: The Eli Lilly Collection of Chinese Art, Indianapolis, 1983, pl. 49, p. 149).

3. Paintings on lacquers, ceramics and bronzes with strong pictorial and naturalistic components including landscapes and large scale images of humans, animals and fantastic creatures were likely based on contemporaneous paintings on materials such as paper or silk. 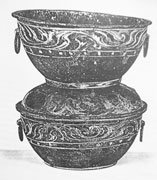 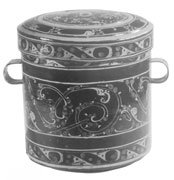