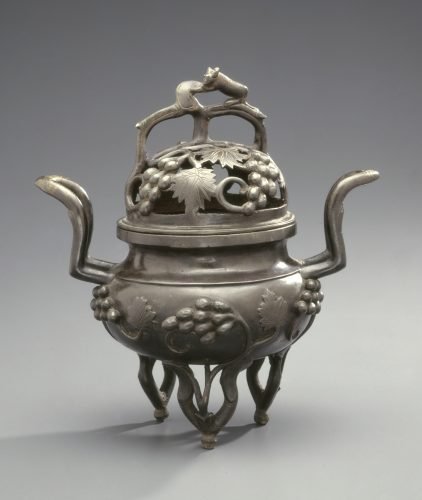 The ancient bronze cooking vessels, the tripods ding and li, were adapted for use as censers by later Chinese artisans who produced them in a range of media. The present bronze vessel of the early Qing dynasty marries an antique form with an up-to-date decoration that appears fresh, whimsical and spirited while at the same time conveying meaningful precepts. The words for squirrel and grape in Chinese are homophonous with the characters for the words peach and pine, symbols of longevity, while the lingzhi fungus is a potent symbol of immortality. The grapevine, an exotic import from the West, became an environment for voracious squirrels in 14th-century representations, when squirrels had become symbols of the Mongols who were devouring China and her riches. Perhaps when the present censer was created, a reference to the Manchu conquerors was hidden in the vines and in the chatter of squirrels. The natural elements are, however, more than decorative and symbolic motifs; they are physically and artistically integrated with the basic bronze shape creating a vessel that is organic in feeling and most engaging in effect.

Incense burners and incense-burning paraphernalia along with vases to hold flowers, leaves, branches or bamboo were additional accouterment that allowed a scholar to further beautify his or her environment with scent and scenery. Sandalwood chips were often burned in place of incense in vessels such as the present where the fragrant smoke would rise through the apertures on the lid.