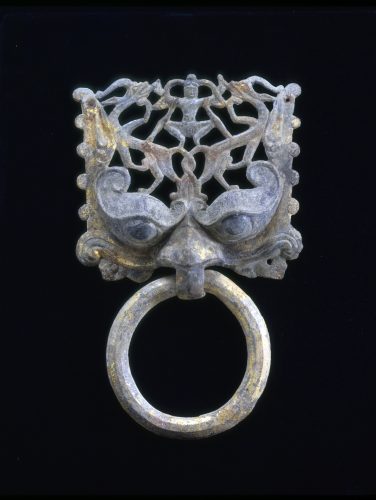 The taotie is an exceptional motif endemic to Chinese culture, prevalent during the Bronze Age and appearing as a decorative embellishment in the arts and crafts of China over several millennia, down even to the present day. During the Han and Six Dynasties period the frontal, bilaterally symmetrical zoomorphic masks produced in bronze and fitted with loose ring handles were common accoutrement. The norm, however, is shattered here and in related examples of the 4th to 5th century by the incorporation of a foreign element. A bare-chested figure wearing a dhoti and a long scarf pulled around the shoulder is most closely associated with Buddhist icons imported from India. Although a vision of the dragon-tamer of Chinese lore is suggested as the figure grasps the heads of the pair of dragons, the dragons might also be interpreted as embracing this new character in their midst, and the mask an expression of the religious complexity of its time. We might take it one step further and suggest that the dragon-tamer in Xianbei dress and his quarry were meant to express the political reality of the time, with the dragons representing China and the dragon-tamer in Xianbei garb the almighty conqueror.

The mask is relevant to us personally as it was acquired from the inimitable Walter Hochstadter, simultaneously a mentor, friend and antagonist, who will long be remembered.