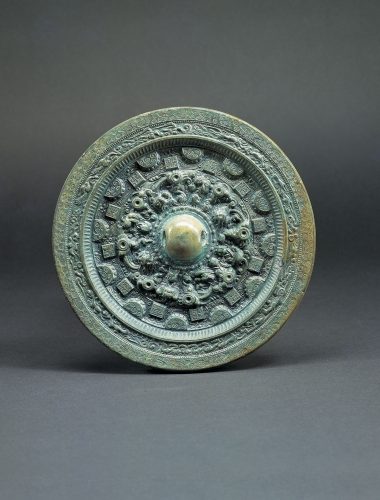 The main pictorial areas of the so-called shenshou or “deities and beasts” mirrors are characterized by a richness, complexity and dynamism in design and in casting. The large pierced hemispherical knob is surrounded by the main zone with a pictorial narrative in high relief depicting human figures and fantastic creatures enclosed by a band of twelve seal-like squares each with a four-character phrase in seal script alternating with whorl-decorated half circles. A saw-tooth band encircled by additional spirits and beasts within a cloud band formed by curling scroll segments completes the composition. The pale green patina is smooth and even.

Notables from popular religion and history, and immortals from myth and legend, partake in the rousing drama on this and others of this shenshou category of mirrors, their magic enhanced by the written word: twelve squares each enclosing four characters on the present mirror. Eight of the four-character phrases are legible and are, in fact, identical to eight of the nine four-character inscribed squares on a mirror in the Cleveland Museum of Art. The inscription on the present mirror reads:
I made this bright mirror
By refining three metals.
(two squares illegible)
Boya is playing music.
Multitudinous gods display their forms.
(two squares illegible)
Good fortune and peaceful slumber,
Through the years he will have increased longevity.
His descendants will also prosper.
Even his master will enjoy longevity.[1]

Many of these very intricate mirrors appear to have been produced in Zhejiang province and dated examples indicate they were produced during the second and third centuries during the Eastern Han dynasty.[2]

1. Kawasaki Hiroshi transcribed the inscription on the present mirror and for the most part we followed Ju-hsi Chou’s translation of the Cleveland mirror inscription: Ju-hsi Chou, Circles of Reflection: The Carter Collection of Chinese Bronze Mirrors, Cleveland, 2000, p. 54. The Cleveland mirror is actually a simplified version of the present type with nine rather than twelve inscribed squares and, according to Chou, “the mythic figures and deities disappeared, leaving only two pairs of auspicious animals facing each other.”