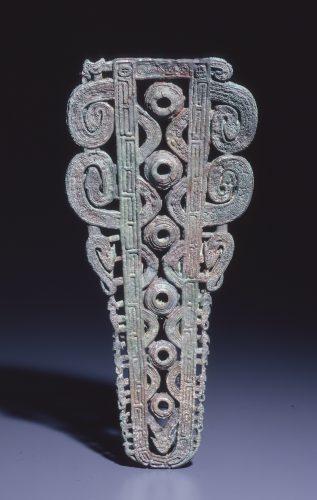 The triangular-shaped scabbard was cast with openwork, intaglio, and raised relief images of snakes and geometric patterns in a bilaterally symmetrical arrangement. Large serpents coil on the edges of the key-fret decorated band framing a central panel, three on each side with smaller snakes stretched along the blade edge diminishing in size toward the tip, while the two trunks of a double-bodied snake descend on either side of a row of discs in the central panel. The décor is textured with multiple parallel rows of dense raised notches beneath a thick green patina.

The migration of bronze technology, whether from the central plains of China or from the Eurasian Steppe, into the region of Yunnan, offered a stage upon which the Dian culture established its place in the history of art. Extraordinary bronze “drum” shell-containers, personal accouterment, weapons, architectural models, along with human and animal sculptures are among the bronze creations that compose a veritable diorama of a society rich in indigenous and imported features, contemporaneous with the late Zhou to the Eastern Han dynasty. This engaging scabbard speaks to us from this land of extremes, its similarity to the arts of the far north in Mongolia, for example, is no less than intriguing while its ritual function a subject to contemplate.

At least one similar scabbard has been published, excavated in Yunnan in 1981 and now in the Yunnan Provincial Museum. See Zhongguo lishi bowuguan [Chūgoku no Hakubutsuka] series 2, vol. 2: Yunnansheng bowuguan, Tokyo, 1988. where it is illustrated with a restored handle pl. 18.