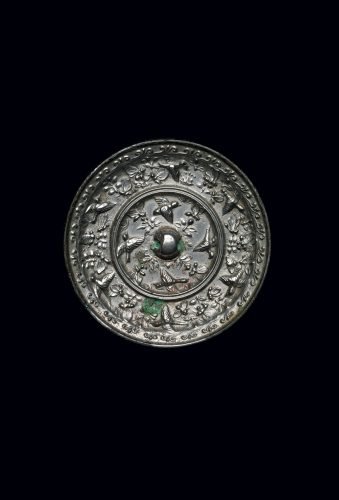 The small mirror with crisply cast decoration is of circular form with a central pierced boss. Surrounding the boss are four sparrows in flight alternating with bees hovering over clover within a sharp, raised, double-line border. Six additional sparrows fly around the outer register divided by winged insects fluttering in groups of three among leafy foliage, all enclosed by a border of attenuated trefoils on the raised rim. All of the casting is finely articulated including the bird feathers and veined wings of the insects. The silvered bronze surface has an attractive sheen on the side with the deeply cast decoration and is slightly duller on the reverse side.

The delightful, jaunty, spring-like motifs of this Tang mirror resonate with meaning quite different from the profoundly symbolic mirrors of former times. Here one feels in the presence of decoration existing almost for its own sake. Charming, sweet, a delight to behold. The decor is significant for how it makes one feel, neither for what it makes one think nor for any expectation it kindles of promised bounty. Despite the penchant of the Chinese for seeing symbolic meaning wherever the eye wanders, wherever it alights, during the Tang it was demonstrably possible to stop and smell the roses. This spirit of the Tang era is captured by contemporaneous painted images of court ladies strolling in what we imagine to be luxuriant gardens and captured also in such mirrors as the present, mirrors that would reflect back to these gentle women, the reality of their beautyand their privileged station. Examples of this quite rare type have been excavated from Tang-period tombs, a mirror from a tomb dated to A.D. 714 illustrated here (fig. 1), while an undated example is in the Cleveland Museum of Art (fig. 2).[1]

At least two mirrors with sparrows and floral sprigs similar to the present have been published, albeit lacking an outer skyscape with birds in flight as in the examples here. One is a multi-lobed mirror that was among the metalwork from an Arab ship that sunk off Beilitung island in Indonesia, carrying a cargo of predominantly Chinese ceramics, (60,000 of them retrieved intact) that was put on board in China in A.D. 830 during the late Tang period.[2] A second related mirror, with foliate rim, is among the treasures of the Shoso-in, in Nara, dedicatedto the Emperor Shomu in the year A.D. 756 (fig. 3). The Beilitung mirror was either produced well before the date of the sailing, closer in date to the 8th century similarly-decorated examples, or it indicates the popularity of this warm and comforting bird design over at least the next century. Such mirrors would have been most appropriate, given their small size, for a youthful female, still in the spring of her life. 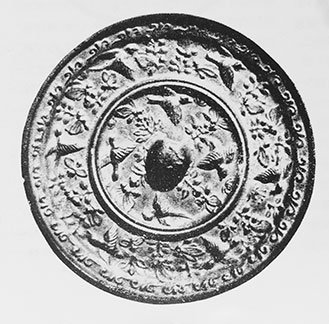 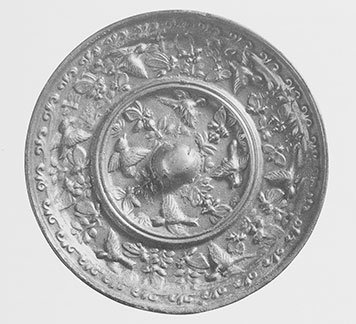 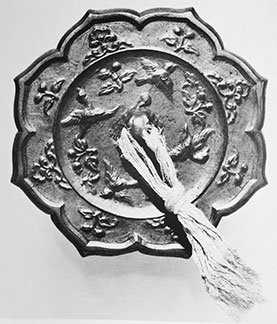