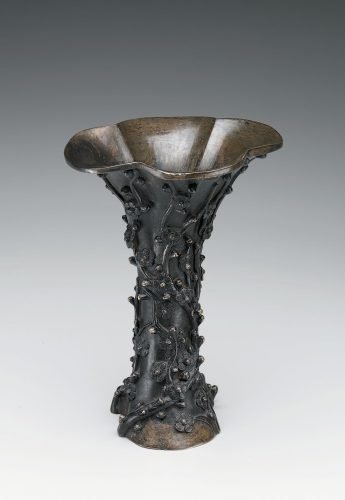 The heavily cast vase is in the form of a gu, an ancient bronze beaker, rising from an irregular tree trunk-form splayed base to an undulant quatrefoil rim. Four budding and flowering prunus branches divided by florets extend up the sides from the base, each with multiple offshoots forming an overall surface design in high relief that is strongly three-dimensional and richly ornamental. The bronze is dark brown with golden highlights, especially enhancing the buds in the midsection of the vessel. The interior has a somewhat more polished appearance than the exterior and the base is countersunk.

Although the ancient bronze gu-beaker form is easily visible underlying the creation here, it has been so completely drawn into the world of nature, it could almost be unrecognizable as such. On the one hand the raised blossoming plum branch design has worked a special magic on the shape, nudging it gently into the background, while, on the other, the irregularly shaped base of the vessel and undulating mouth make the vessel appear as a natural growth, as if it were the rugged trunk of an ancient tree. This effect is quite different from the usual appearance of the gu vessel shape produced in contemporaneous bronze (fig. 1). Ancient motifs were simply reworked sometimes in expressive, outlandish, or even banal forms and displayed in sections required by the vessel form with distinctive rising blades on the trumpet shaped neck and descending blades on the foot of the vessel. Here the raised blossoming plum branch design meanders across the entire surface of the vessel, creating a different kind of unity between form and decor, which results in a very powerful overall effect.

Few later Chinese bronzes appear to share this aesthetic, among them a censer from the Robert H. Clague collection (fig. 2). The small vessel is cast as an open blossom, its large, lush, overlapping petals appearing to hold the vessel within its floral cup, with lotus appliqué motifs on each petal. The vessel is described as having been made using casting combined with cold-metal work in which the lotus motifs were cast separately and attached with rivets.[1] A partially gilt-copper vase is decorated with prunus, pine and bamboo through cutting and beating a thick sheet of copper (fig. 3).[2] These two vessels, while they are not in the mainstream of traditional metalwork style, still honor ‘zoning laws,’ so to speak, insofar as composition is concerned.

The prunus has been an ubiquitous image in Chinese arts and crafts since the Song dynasty (A .D. 960-1279) when it caught the special attention of the literary elite during a time when nature, and all of its mystery, mechanics and manifestations, profoundly entered the consciousness of those whose taste and desires directed the course of the creative arts. The seductive beauty of the prunus would be enough to justify its popularity and longevity as a subject for artists and craftsmen. The tender, plump blossoms, pale in hue against the dark, dry gnarled wood of the tree is a design of nature that we could not possibly better. Set against a cold blue sky, a bit of snow on the branches? We cannot better that either. But what the Chinese artist and craftsmen could do, and did so successfully, is grab that subject and give it a potentially permanent life in almost all the media available to them, whether it be in porcelain or stoneware (figs. 4-7), in bamboo or wood (figs. 8-9), in rhinoceros horn or lacquer (figs. 10-11), or in jade (fig. 12). The bronze vessel here has far more in common with any and all of these creations than it does with the archaistic bronzes of the Ming and Qing periods and therefore, among bronze craftsmen, its creator appears to have taken the road less travelled. 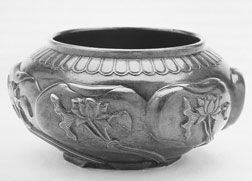 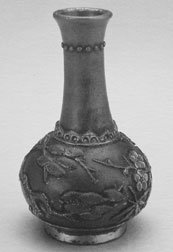 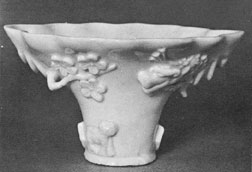 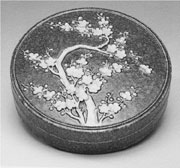 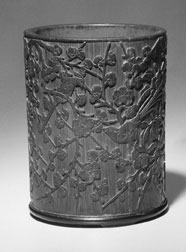 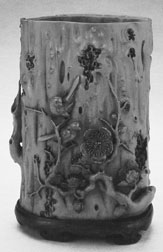 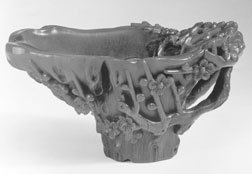 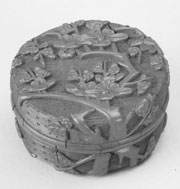 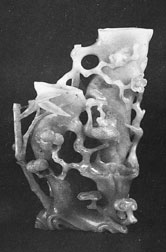