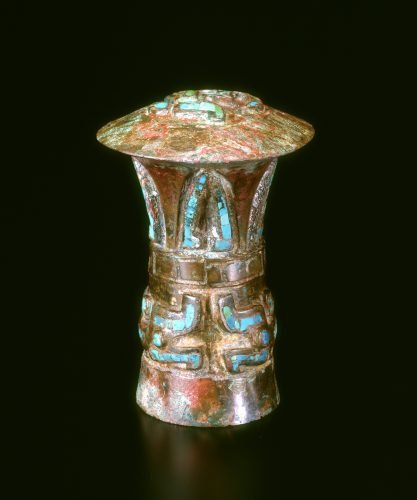 On the basis of comparative pieces from the late Shang period, it appears that the present piece would have served as a protective as well as decorative fitting for a yoke, an axel cap or possibly as one of the two finials decorating the crosspiece of a chariot. The bold relief style with large pieces of turquoise employed in the work, along with the specific form of the dragon, is comparable to late Shang-Western Zhou craftsmanship.[1] The use of turquoise in various contexts fashioned for and provided to the elite dates back at least to the Neolithic period in China, the semi-precious stone adding winning color and flare whenever and wherever it was used. The powerful decorative quality present in such a small piece as the finial here demonstrates that careful attention to detail and design at this time were likely expected and well-appreciated by the privileged recipients.