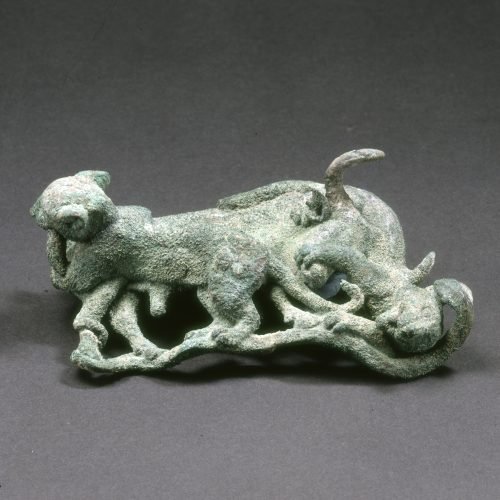 A dynamically and expressively executed animal combat scene with a long-horned bull pitted against two feline creatures, with a snake writhing among them, is produced in high openwork relief on the front of the belt hook. The uncoiled body of the serpent bears the weight of the bull, which lunges forward in a struggle to shake off the feline creatures, one attacking its rear, the other scrambling over its head and wedged in the curvature of its horn, clawing at its face while at the same time biting the serpent which in turn strikes at the cat’s ear. The animals are naturalistically modeled to produce muscled bodies that are lithesome and agile in the case of the cats, massive and steadfast in the case of the bull. A hook and aperture on the reverse served for fastening the two ends of a belt. The entire surface has developed a green patina, which is of relatively rough surface texture and matte in appearance.

The scene depicted on the belt hook seems both impossible and perfectly natural. Such was the skill of the bronze designers and casters active in the kingdom of Dian in Yunnan, which had risen to heights of artistic expression and achievement by around the 3rd to 2nd centuries B.C. The piece accords well in form, style, and execution, as well as in the condition and nature of its patina, to objects excavated from the royal cemetery of the Dian kingdom located at Shizhaishan in eastern Yunnan.[1]

While the belt hook developed as a perfect vehicle for animal combat scenes, similar subjects were depicted on a variety of bronze objects and vessels associated with the Dian culture. As summarized by Michele Pirazzoli-t’Serstevens: “At first glance this narrative art in bronze—dashing, complex, with perfect mastery of its artistic means—owes little to the pre-Han Chinese world. Yet is does reflect the meeting of many cultural strands, despite the fact that the borrowings have been totally assimilated and freely adapted. For example, Dian bronzes contain features of Sichuan origin that had already undergone Chinese influence and others that originated in the kingdom of Chu, as well as influences from the animal style of the steppes. These last borrowings are obvious in the representations of animal combats and in the shape and ornament of some weapons.”[2]

1. See a similar bronze belthook of the Dian kingdom, 2nd-1st century B.C., excavated at Shizhaishan, Jinningxian, Yunnan, in Chugoku no Hakubutsukan, series 2, vol. 2, (Yunnan Provincial Museum), Tokyo, 1988, pl. 41, and another with a boar in place of the bull, ibid, pl. 42.