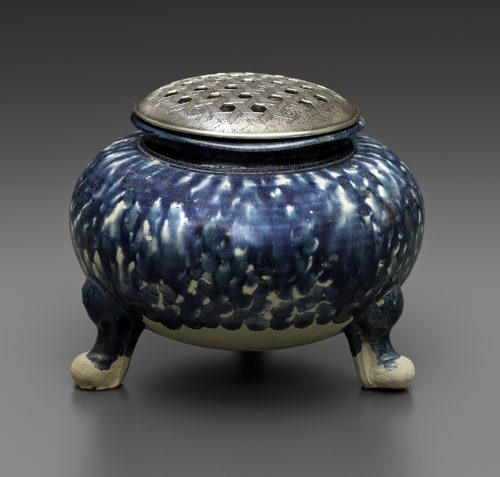 The vessel, finely and evenly potted from high quality, fine-grained earthenware clay that appears pinkish white, is characterized by its compressed ovoid body surmounted by a flared and everted rim and its well-formed cabriole-style legs. The cobalt pigment was applied over a clear glaze in multiple rows of splashed overlapping dots, sometimes blurring to form broad expanses of blue color. A clear glaze covers the inside thickening to a straw tint.

Ceramic tripod vessels of the Tang and later dynasties were modeled ultimately on bronze ceremonial cooking vessels of the Shang and Zhou dynasties. The earthernware sancai and related products in tripod form of the Tang period were discovered not only in tombs, but at contemporaneous domestic sites as well, and they were exported as evinced by finds at such port sites as Yangzhou and at, for example, archaeological sites in Japan. When the present vessel reached Japan is not possible to say, but at some point it was fitted with an openwork silver lid contributing to its functionality and aesthetic value in Japan where it was used by its most privileged owner as an incense burner.

The cobalt-decorated wares of the Tang were considered to be among the most precious due to the high cost of the mineral. Special attempts were made during the Tang to use the cobalt outside the usual range of sancai decorative schemes perhaps due to the natural tendency of the cobalt pigment to resist the streaming and thus easier to control and manipulate than other colors in the sancai palette. Although the present ceramic and the sancai group represent a daring leap forward in Chinese aesthetics, the cobalt-decorated wares further presage one of China’s greatest contributions to world ceramics: the underglaze-blue decorated porcelains of the later dynasties. And Tang craftsman were at the forefront of that development. The ceramics they decorated with underglaze cobalt-blue designs have been recovered at Tang-dynasty archaeological sites and are considered actual precursors of “blue-and-white” of subsequent dynasties.